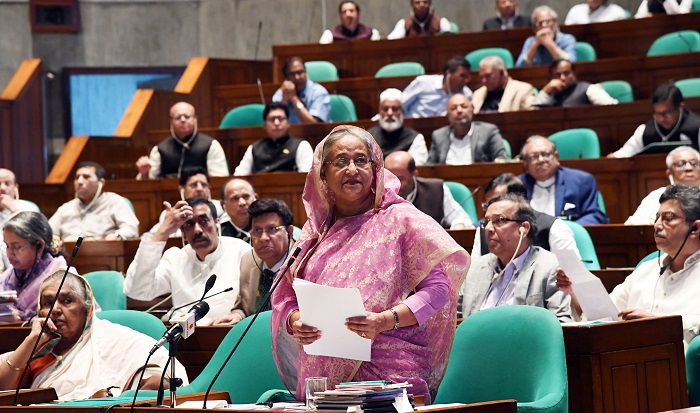 Prime Minister and Leader of the House Sheikh Hasina on Thursday put emphasis on enactment of more strict laws against rape and inflicting stringent punishment to the offenders, saying that such a heinous crime is never acceptable.

The premier came up with this call while delivering her valedictory speech of the third session (budget session) of the 11th Jatiya Sangsad in the House with Speaker Dr Shirin Sharmin Chaudhury in the chair.

“It’s necessary to frame more strict laws against rape and give stringent punishment for it … such a heinous crime is never acceptable,” she said.

The prime minister simultaneously issued a strong warning against such an offence and said that the government will take necessary actions in this regard.

“We’ll take necessary actions against those who will commit such a crime,” she said.

The prime minister said social crimes like unleashing beastly torture on the children and killing people or children in words have increased.

“When such a crime is committed, it’s video and information surface,” she said.

In this connection, Sheikh Hasina urged those involved in the media to show the picture of the rapist repeatedly.

“I’ll tell those involved in print and electronic media to show the picture of the rapist time and again so that he (rapist) feels shame for the offence,” she said.

The Leader of the House also called upon the male community alongside the womenfolk to be vocal against such a crime.

“Why only the females will protest against the rape. The matter is also a shame for the male community as they are committing such a crime. So they’ll have to be more vocal against it,” she said.

The prime minister in her speech also spoke about various issues like spreading of dengue, price hike of gas and age limit for the government jobs and the country’s development in various sectors.