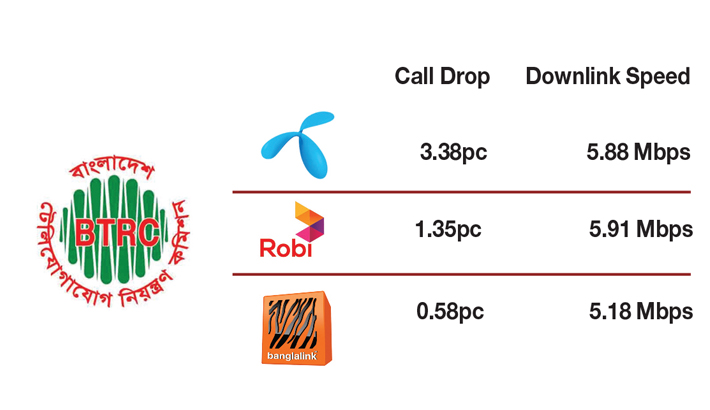 Even as mobile phone users continue to complain about regular call drops and poor internet services, the Bangladesh Telecommunication Regulatory Commission (BTRC) is yet to take any initiative to address the growing menaces, reports UNB.

Some users say they face call drop problem five to six times a day and that they often have to wait for a long time to get through. Users are also complaining about getting 2G or 3G in places where they are supposed to get 4G internet services.

Shamsunnahar, a resident of Bashundhara residential area, uses both Grameenphone and Robi SIMs. She said poor mobile network has made speaking on phone an irritating experience. "The calls are dropped several times even when the network is available," she said.

Another resident of the area, Sarwar Alam, who also uses Robi and GP SIMs, said his experience was similar to that of Shamsunnahar.

Rahman, a resident of Malibagh who uses Grameenphone, said he faced call dropissue five to six times a day.

Between November 6 and 8 of last year, the BTRC conducted a Quality of Service (QoS) test in 15 areas of the capital. It made 3,300 machine generated calls with a duration of 90 seconds. Similar tests were conducted in other cities. Test reports showed GP, the country's largest mobile operator, recorded a call drop rate of 3.38 percent. Second largest operator Robi's call drop rate was 1.35 percent while Banglalink's rate was 0.58 percent and state-owned Teletalk's rate was 1.58 percent.

But the BTRC and International Telecommunication Union set 3 percent as the limit.  Grameenphone took an average of 10.14 seconds for connecting to the dialed number. The time was 6.15 seconds for Robi, 7.69 seconds for Banglalink and 7.11 seconds for Teletalk. In this case, the BTRC set 7 seconds as the benchmark for connecting with the dialed number.  4G internet speed was also tested. The authority set 7 Mbps as the lowest speed for 4G carriers. But speed provided by the top three operators was below the lowest limit set by the BTRC.

The average downlink speed of GP was 5.88 Mbps while 5.91 Mbps was recorded for Robi and 5.18 Mbps for Banglalink. Teletalk was not operating as a 4G carrier during the test.

"We've received lots of complaints about dropped calls. Even ministers are facing the problem," Posts and Telecommunications Minister Mustafa Jabbar said when asked about the situation.

He said theBTRC has been directed to take action against those concerned. Jabbar said the mobile network operators in the country do not have enough spectrums to handle huge subscribers.

"The number of dropped calls is high among GP users as it (the company) handles comparatively more subscribers. But there's no scope to compromise the quality of service," he added.  Asked about GP's call drop issues, BTRC Chairman Jahurul Haquenoted that all the operators hadsome problems. "We take action to solve issues whenever subscribers lodge complaints," he said. We won't compromise in case of quality."