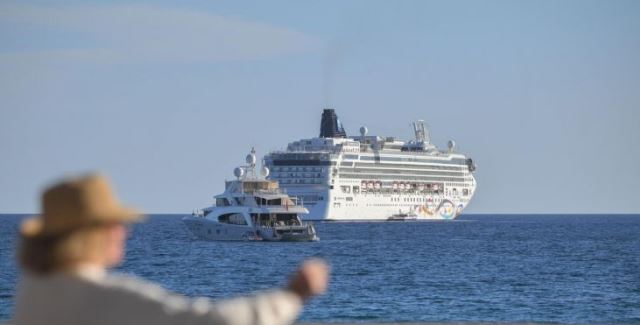 Cruises are enjoying a boom fuelled in part by hordes of Chinese tourists taking to the high seas, but green groups warn a wave of hulking new liners may cause environmental devastation.

Gone are the days when cruising was the preserve of retirees, who would while away the hours lounging in deckchairs, playing bingo or taking part in formal dinner-dances.

Many of the new, more sophisticated ships aim to appeal to the rapidly growing Chinese cruise market -- now the second-biggest in the world after the US -- and are choosing cities in the Asian giant as their home ports.

As tourism booms in increasingly wealthy China, there is a growing "desire and enthusiasm" for cruises, said Wang Mi, spokeswoman for Chinese online travel agency Tuniu.

"Cruise products are very popular with seniors, families and honeymooners in China," she told AFP.

About 30 million people worldwide are expected to go on a cruise this year, up nearly 70 percent from a decade ago, according to the Cruise Lines International Association.

While the more mature US market remains the largest globally, China is growing fast -- last year about 2.4 million Chinese tourists went on a cruise, more than triple the number in 2014.

There is rising demand right across Asia with growth at double digits in some countries, said Gavin Smith, senior vice president international of US cruise giant Royal Caribbean.

"The Asian market is increasingly important to global cruising," he said.

But the rising number of monster liners, often hundreds of metres long and several stories high, has increased concerns about environmental damage.

"We see a big range of environmental impacts from the cruise industry -- everything from air pollution to waste water, sewage, oily discharges, food wastes, plastics," Marcie Keever, oceans and vessels programme director at Friends of the Earth US, told AFP.

A major concern is high levels of sulphur oxide emissions, a toxic gas which causes respiratory problems and lung disease, and can lead to acid rain and damage aquatic species.

In 2017 ships operated by Carnival Corporation -- the world's largest cruise company, which has several brands -- emitted 10 times more sulphur oxide in European seas than all the passenger vehicles in the continent, according to a study by NGO Transport & Environment.

Efforts are being made to reduce the amount of the gas emitted. New industry standards will from next year require all ships to cut sulphur oxide content in fuel to a maximum 0.5 percent from the current 3.5 percent limit.

There are also worries about the impact of mammoth vessels on the cities they berth at during voyages.

A 13-deck liner crashed into a tourist boat in a Venice canal last month, injuring four tourists, and prompting a protest from local residents who called for a ban on large cruise ships in the UNESCO World Heritage site.

In addition, ships jettisoning waste at sea and the huge amounts of electricity used by the vessels have angered environmentalists. In June Carnival was fined $20 million in the United States for dumping plastic waste into the ocean and other environmental violations.

Industry players insist they are doing their part to reduce pollution.

Royal Caribbean has installed systems that clean almost all sulphur oxide and other pollutants from emissions, according to Nick Rose, the firm's director for environmental programmes.

"Cruise ships are cleaner than ever before and improving with each new class of ship," Rose told AFP.

Typical of the new generation of liners is Royal Caribbean's Spectrum of the Seas.

Custom-built for the Asian market and billed as the region's biggest cruise ship, the 345-metre (1,140-foot) vessel can carry over 5,600 guests.

Entertainment includes simulated skydiving in a wind tunnel, bouncing on a trampoline while wearing a virtual reality headset and bumper cars, all aimed at an increasingly younger generation of cruise-goers.

There are 17 restaurants onboard and the huge range of accommodation includes a two-storey family suite that comes with a private karaoke room and children's slide.

This can cater to Chinese tourists who often go on cruises in large groups.

Passenger Sylvia Bau, a veteran cruise-goer on holiday with six relatives, was amazed at the rapid growth of liners over the years.

"You can live in the ship for days without getting bored," the 58-year-old Singaporean said as the vessel made a call in the city-state, one of several stops in Southeast Asia before arriving at its home port of Shanghai.