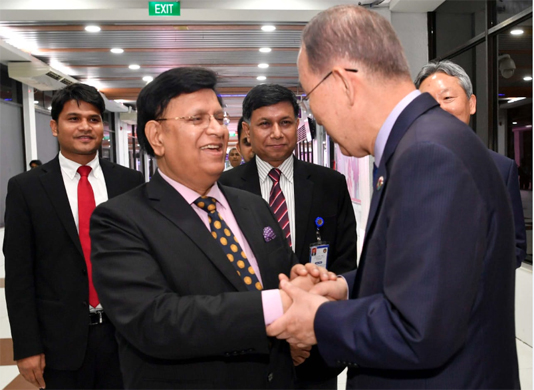 Both of them attended the “Dhaka Meeting of the Global Commission on Adaptation” that was inaugurated by Prime Minister Sheikh Hasina on Wednesday morning at InterContinental Dhaka.

Ban Ki-moon, the current chair of Global Commission on Adaptation (GCA), addressed the inaugural session where he termed Bangladesh as the ‘best teacher’ and ‘miraculous’ in climate change adaptation.

Ban proposed installation of a ‘global centre for climate change’ adaptation in Bangladesh while he called on Prime Minister Sheikh Hasina along with Marshall Islands President Dr Hilda Heine on Wednesday.

He said the proposed centre would monitor and oversee the adaptation issues particularly for the South and South-East Asian nations.

While visiting the Rohingya camp, the former UN secretary general expressed his fears that the issue would eventually be an unbearable crisis for Bangladesh as he criticized Myanmar for its visible reluctance to take back the forcibly displaced people.

“It is not possible for Bangladesh to host such a large number of Rohingyas for long,” he told newsmen in Cox’s Bazar.

The former South Korean diplomat, Ban, who subsequently served as the eighth Secretary-General of the United Nations for two consecutive terms from January 2007 to December 2016, said Rohingyas appeared as a huge “burden” for a country like Bangladesh.

During her visit, the Marshal Island president also held meeting with his Bangladesh counterpart Md Abdul Hamid at Bangabhaban on Tuesday where she lauded the role of Bangladesh government on the climate change resilience issue.