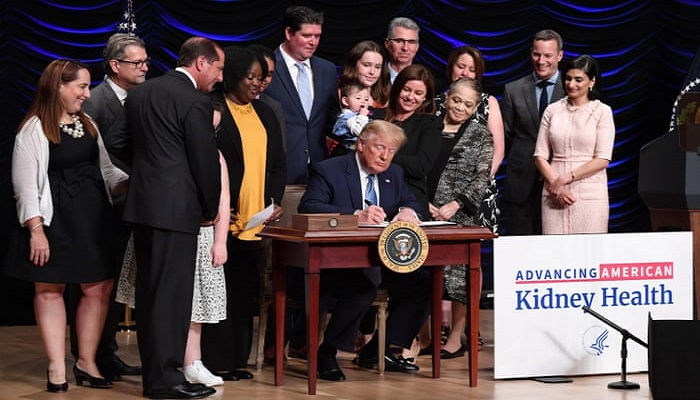 Donald Trump surprised the medical community on Wednesday afternoon, when he claimed “the kidney has a very special place in the heart”.

Speaking as he announced a government plan to tackle kidney disease, Trump went on an extended riff about the efforts of specialists.

“You’ve worked so hard on the kidney. Very special. The kidney has a very special place in the heart. It’s an incredible thing,” Trump gushed.

The president’s declaration is likely to raise eyebrows among many, as the kidney is not usually considered to be located in the heart.

According to the “All about kidneys” section of the National Kidney Foundation website, the kidneys – most people are born with two – “are in your lower back”. The human heart meanwhile, as per an ABC News explainer: “Is in middle of your chest, in between your right and left lung. It is, however, tilted slightly to the left.”

It is likely Trump does not actually believe the kidney(s) is/are situated inside the heart, within the chest. The president may, in his idiosyncratic phrasing, have been stressing the importance of a healthy kidney to the American populace.

Trump’s medical views are worthy of consideration, however, as he is no stranger to health complaints. The president was afflicted by bone spurs in both heels during the Vietnam war draft, which meant he avoided military service.

Earlier, on June 7, Trump attacked NASA and claimed that the moon is 'a part' of Mars. Followers of astronomy were in for a surprise when he came up with this announcement.

In 2016, Trump also said the bone spurs had later healed.