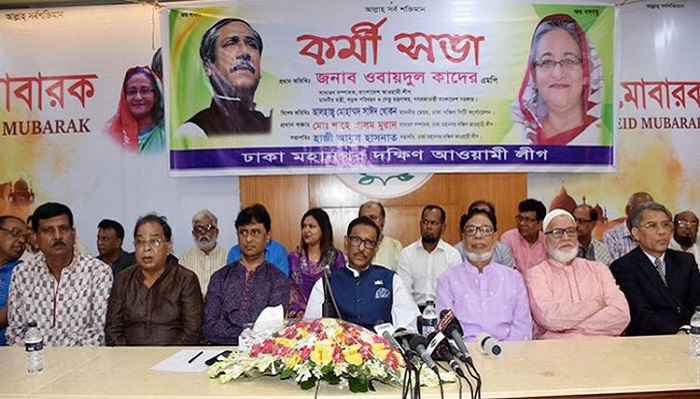 Road Transport and Bridges Minister Obaidul Quader on Thursday alleged that rumour over the construction of the Padma Bridge is being spread to create troubles for the government.

“The opposition parties (anti-Awami League political parties) are spreading rumour that human heads would be needed for the construction of the Padma Bridge. They are now spreading propaganda as they have failed in movements and elections,” he said.

He made the remarks before reporters after he attended an AL worker’s meeting in front of the party's Bangabandhu Avenue headquarters on Thursday afternoon.

Obaidul Quader, also the general secretary of AL, claimed that conspiracy is on progress though the anti-government activities have weakened. “They (anti-Awami League political parties) can’t tolerate that the government is constructing the Padma Bridge with domestic funds,” he said.

Criticising BNP secretary general Mirza Fakhrul Islam Alamgir for his comment on democracy, the AL leader said, “There is no crisis in the democratic institutions of the country. If there is any crisis of democracy, that exists in BNP.”

Earlier, propaganda that a human head would be needed for the construction of the Padma Bridge went viral on social media platform Facebook.

Yesterday, the bridge authorities urged the people not to be misled by the rumour over the construction of Padma Bridge through an official handout.