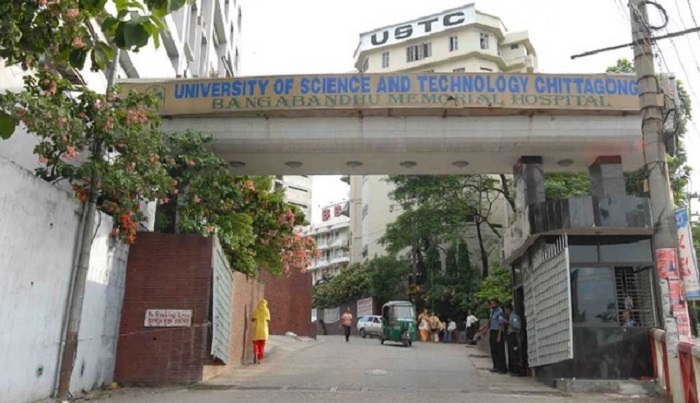 University of Science and Technology Chittagong (USTC) authorities on Thursday suspended its four students for their involvement in allegedly assaulting a university teacher and pouring kerosene on him.

The suspended students were identified as Mahmudul Hasan, Sheikh Rasel Shahen Shah, Md Ali Hossain and Maynul Alam.  All of them are the students of English Department of the university.

The USTC acting register Dilip Kumar Barua disclosed the decision at a press conference at the Chattogram Press Club in the port city.

In a written speech, Dilip Kumar Barua said, “Mahmudul Hasan, a master’s student of the English Department was suspended permanently while his associates Sheikh Rasel Shahen Shah, Md Ali Hossain and Maynul Alam were suspended for one academic year.”

He also informed that the decision was made as per the findings of a 3-member probe committee, formed to investigate the incident of pouring kerosene on the university teacher.

On July 2, a group of students of USTC attacked USTC English Department Professor Masud Mahmud and poured kerosene on him apparently over some departmental issues.

Earlier in April, a few students complained that Prof Masud Mahmud, also former Chittagong University professor, has discussed sensitive issues including dress code, life-style and human relationship in classes though those were irrelevant to the curriculum.