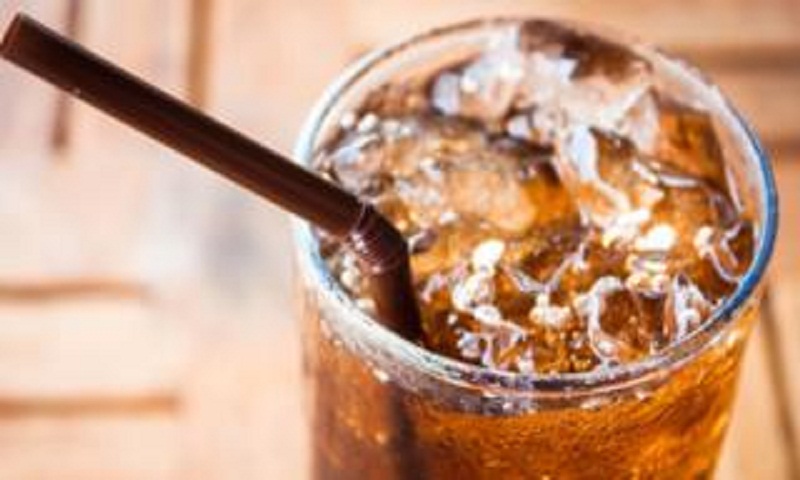 The link was suggested by a study, published in the British Medical Journal, that followed more than 100,000 people for five years.

The team at Université Sorbonne Paris Cité speculate that the impact of blood sugar levels may be to blame.

However, the research is far from definitive proof and experts have called for more research.

What counts as a sugary drink?

The researchers defined it as a drink with more than 5% sugar.

That included fruit juice (even with no added sugar), soft drinks, sweetened milkshakes, energy drinks and tea or coffee with sugar stirred in.

The team also looked at diet drinks using zero-calorie artificial sweeteners instead of sugar but found no link with cancer.

How big is the cancer risk?

The study concluded that drinking an extra 100ml of sugary drinks a day - about two cans a week - would increase the risk of developing cancer by 18%.

So, if they all drank an extra 100ml a day, it would result in four more cancers - taking the total to 26 per 1,000 per five years, according to the researchers.

"However, this assumes that there is a genuine causal link between sugary drink intake and developing cancer and this still needs further research," said Dr Graham Wheeler, a senior statistician at Cancer Research UK.

Of the 2,193 cancers found during the study, 693 were breast cancers, 291 were prostate cancers and 166 were colorectal cancers.

Is this definitive proof?

No - the way the study was designed means it can spot patterns in the data but cannot explain them.

And one possible explanation is that sugary drinks are increasing cancer risk.

But, alternatively, people who drink the most sugary drinks could have other unhealthy behaviours (eating more salt and calories than then rest, for example) that raise their cancer risk and the sugary drinks themselves could be irrelevant.

So, the study cannot say that sugary drinks cause cancer.

"While this study doesn't offer a definitive causative answer about sugar and cancer, it does add to the overall picture of the importance of the current drive to reduce our sugar intake," said Dr Amelia Lake, from Teesside University.

She added: "Reducing the amount of sugar in our diet is extremely important."

Is this just about obesity?

Obesity is a major cause of some cancers - and excessive consumption of sugary drinks would increase the odds of putting on weight.

However, the study said it was not the whole story.

"Obesity and weight gain caused by sugary-drink excessive consumption certainly played a role in the association but they did not explain the whole association," Dr Mathilde Touvier, one of the researchers, told BBC News.

The French researchers say the link "was strongly driven by sugar content" and they blame blood sugar levels.

They also suggest some chemicals in the beverages, such as those that give an appealing colour, may be to blame.

However, their study does not attempt to answer this question.

"I find the biological plausibility of this difficult, given there was no significant difference between groups in relation to body weight or incidence of diabetes, which is often cited as an associated risk," Catherine Collins, an NHS dietitian, said.

What do the researchers say?

"Sugary drinks are known to be associated with an increased risk of cardiovascular diseases, overweight, obesity and diabetes," said Dr Touvier.

"But what we show is they are also associated, maybe, with cancer risk."

They say their research is further evidence that taxing sugary drinks is a good idea.

"These data support the relevance of existing nutritional recommendations to limit sugary drink consumption, including 100% fruit juice, as well as policy actions, such as taxation and marketing restrictions targeting sugary drinks," their report says.

The UK introduced a sugar tax in 2018, with manufacturers having to pay a levy on high-sugar drinks they produce.

What do drinks companies have to say?

The British Soft Drinks Association said the study "does not provide evidence of cause, as the authors readily admit".

Its director general, Gavin Partington, added: "Soft drinks are safe to consume as part of a balanced diet.

"The soft drinks industry recognises it has a role to play in helping to tackle obesity, which is why we have led the way in calorie and sugar reduction."