Shakib and Mortaza have no replacements: Nazmul Hasan 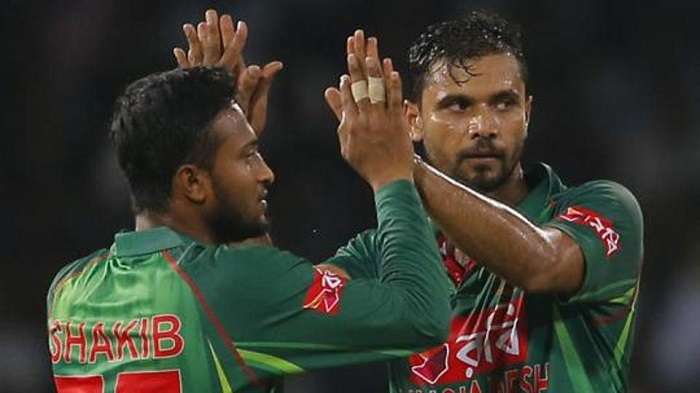 Nazmul Hasan, Bangladesh Cricket Board's president, heaped praise on Mashrafe Mortaza for his fighting spirit despite his poor form in the World Cup.

The form of Mortaza remained a talking point throughout the World Cup as with him failing to inspire his teammates through his bowling, picking only one wicket from eight matches.

While Shakib al Hasan dominated throughout with both bat and ball, it was not the case with Mortaza, who often looked jaded in the field and seemed to be struggling on numerous occasions. However, Nazmul insisted that they were not surprised as he was carrying a grade-two tear from the tri-nation series in Ireland but was happy to see the fighting spirit that kept him going despite all difficulties.

"Mashrafe doesn't come into the team as a player. But, if you talk about captain then we won't find a captain like him anywhere," Nazmul said in London on Wednesday (July 10). "I say this all the time, two players have no replacements. Shakib as a player and Mashrafe as a captain.

"Except these two, everyone has alternatives, but it's tough to get replacements of these two [cricketers]. He didn't do well in the World Cup but we knew that it's very likely that he won't do well. We didn't expect him to bowl well in these conditions. He got injured from the tri-series final in Ireland; he has got grade-two tear.

"But he is a fighter. We had talked once or twice that he will be rested. He decided that too. But afterwards he thought, 'I have fought for this country my whole life and now I will get down for the last two matches and I am used to playing with injuries'. We need this type of mentality from everyone," he said.

Talks of Mortaza'a retirement hogged the spotlight partly through the tournament since he announced that he was not ready to quit cricket altogether and was eyeing to continue. Earlier, Mortaza had said that it would be his last appearance in a World Cup, sparking speculation of whether he wanted to say goodbye to his 18-year old international career following the tournament.

According to Mortaza, though, he will quit if there is insistence from the board. Otherwise, he is keen on continuing despite age looking to be taking a toll on him. After all, he has had as many as seven surgeries on his knee. The BCB president hinted that they are trying to give Mortaza a grand farewell.

"We will try to do that [farewell] as good as possible," said Nazmul. "It will be great if we do it on our home soil. The last day we talked with him, we said that. We want to do it properly [farewell match] in our country," he said.