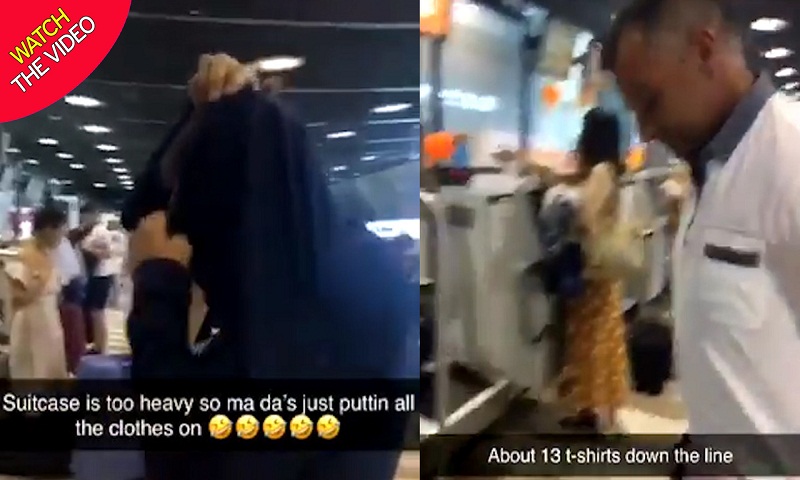 During air travel, excess baggage fines are a frustrating expense that many travellers face. No wonder travellers are coming up with innovative approaches to avoid the fine. One such person is John Irvine who came up with this funny but practical way to avoid his luggage fines. And, his video is now going all sorts of viral on social media.

John Irvine, from Scotland, was travelling back from Nice in France to Edinburgh airport with his family, reports Metro. That is when he was informed that his baggage weighed eight kilograms extra and he couldn’t get them aboard without paying an extra fee. Unwilling to pay, Irvine decided to pile on a total of fifteen shirts and jumpers on himself, from his suitcase, to reduce its weight.

In the video, captured by his son Josh, Irvine is seen sweating as he puts on layer after layer of clothing weighing up to 8 kgs.

“The lassie at the counter asked us if we wanted to pay extra but my dad just looked up at her and said ‘Hey, watch this,’” Josh Irvin told to Metro. “[He] zipped open the suitcase and quickly flung on about 15 jumpers to help cut down the weight,” he further added.

While describing the situation to Metro Josh said, “My ribs were sore from laughing. The staff were in stitches but trying to get through the security was a struggle because they thought he was trying to smuggle something under all his clothes.” “Thankfully we got through eventually,” he later added.

It didn’t take long for people to shower the post with funny comments. While some appreciated his cleverness, others related to his plight. Here is how people reacted.