Rohingya crisis to be unbearable for Bangladesh, Ban fears 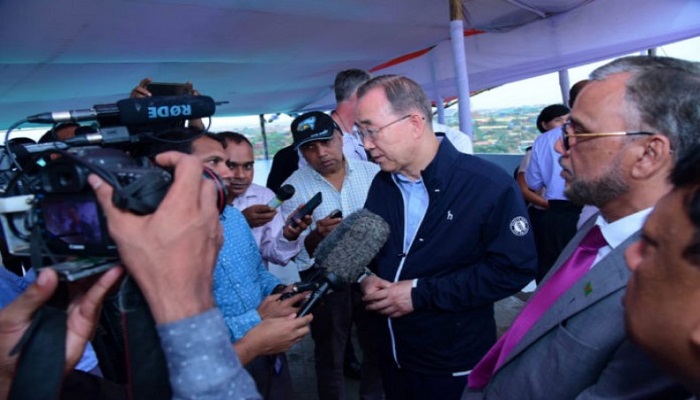 Ban Ki-moon also expressed his fears that the Rohingya issue would eventually be an unbearable crisis for Bangladesh.

The former UN boss came up with this observation to journalists while visiting a makeshift Rohingya camp along with Marshal Island President Dr Hilda Heine and World Bank CEO Dr Kristaline Georgieva.

“It is not possible for Bangladesh to host such a large number of Rohingyas for long,” he told newsmen.

The former South Korean diplomat, Ban, who subsequently served as the eighth Secretary-General of the United Nations for two consecutive terms from January 2007 to December 2016, said Rohingyas appeared as a huge “burden” for a country like Bangladesh.

Ban described Myanmar’s role in repatriating Rohingyas was much less that what was expected as he visited the makeshift camps of the forcibly displaced people on the outskirts of this sea resort town.

“Myanmar government should do much more so that Rohingyas can return to their homeland without fear and persecution,” he said as the three high-profile dignitaries visited the Kutupalang Rohingya camp in Cox’s Bazar.

He, however, highly lauded Prime Minister Sheikh Hasina and Bangladeshis for extending refuge to more than 1.1 million Rohingyas on humanitarian ground despite constrains of internal resources.

Ban sought harmonious solution to the Rohingya crisis through dignified and fearless return of the Myanmar nationals and thanked the UN organizations for extending their humanitarian assistance to Rohingyas.

He said more than 1.1 million Rohingyas have settled here from the Myanmar’s Rakhine State. “There is great dismay and concern among the Rohingyas that I watched myself,” Ban said.

“So, I sincerely hope that there will be harmonious solution to the problem,” he said.

The former UN Secretary General said when he served the world body he helped tens of millions of refugees including Syrians. “But what I saw today is really heartbreaking,” he said, hoping that the Rohingyas will be able to return to their homeland safe and sound.

Ban highly appreciated and commended the compassionate leadership and generous support of the Bangladesh government led by Prime Minister Sheikh Hasina for helping the Rohingyas.

“It’s very important to make sure that adaptation and mitigation go hand in hand,” he remarked.

The former UN chief arrived Dhaka yesterday (Tuesday) to attend a meeting on climate change adaptation along with Heine and Georgieva.

“Bangladesh opened its border while its people opened their heart to Rohingyas,” Georgieva said.

Heine, Ban and Georgieva also planted separate saplings on the premises of the Rohingya camps as gestures of their solidarity to these vulnerable displaced Myanmar nationals.

Bangladesh is hosting over 1.1 million forcefully displaced Rohingyas in Cox’s Bazar district and most of them arrived there since August 25, 2017 after a military crackdown by Myanmar, termed as “textbook example of ethnic cleansing” by the UN.