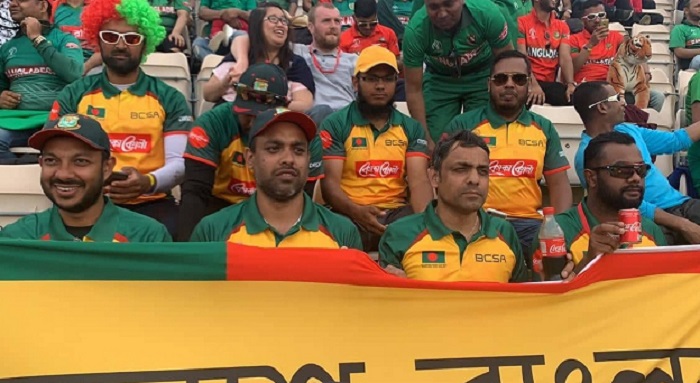 A non-resident Bangladeshi sport enthusiastic has been flagged off the country moving around the cities to support the cricket excellences from red-green jersey holders.

As a die-hard supporter of Bangladesh cricket, Abdus Salam became familier among the expatriate community as Tiger Salam in England.

Salam continued to show his organising level while introducing United Kingdom-based Moulvibazar Cricket Club and Tiger Cricket London on eve of this century.

London Tiger Cricket contributed to inspire Bangladeshi cricketers as Abdus Salam roamed around the cities where Bangladesh team play.  Thousands of cricket lovers on boarded the platform for supporting sport.

The cricket enthusiastic continued his joyous move on the social media during the on-going cricket world cup as usual.

“Cricket established a new identity for Bangladesh across the world. A cricketer play role as an ambassador of the nation. All of us should support crickets all time as they can keep excellence in field.

Expatriate businessman Salam came to Dhaka in 2011 with flock of supports to celebrate the ever first World Cup in the country.

Salam established Bangladesh Cricket Supporters Association at London in 2016 which has a member base of 1.5 thousands now. He moved around the venues in England during Champions Trophy.

Salam has planned to organise cricket tournament among supports in Bangladesh and Britain next year.