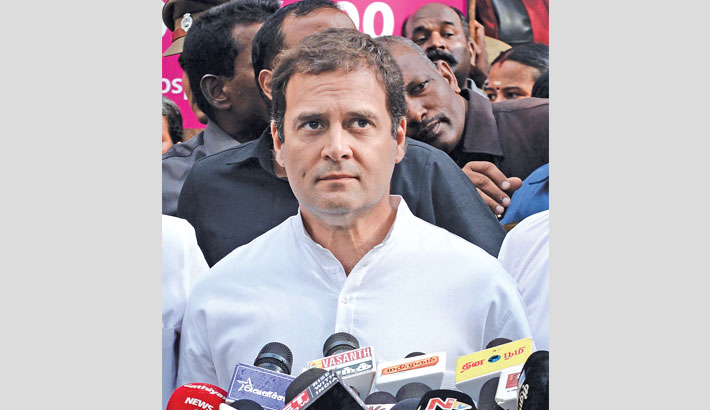 NEW DELHI: With the political turmoil in Karnataka bringing the coalition government on the brink of collapse, Indian Congress leader Rahul Gandhi, in a rare occurrence, raised slogans over the crisis in the Lok Sabha on Tuesday, reports Indian Express.

Gandhi joined the Lok Sabha proceedings in the afternoon when Congress leader in the House Adhir Ranjan Chowdhury was raising the Karnataka issue, accusing BJP of “poaching” its MLAs in the state.

However, Speaker Om Birla disallowed Congress from raising the issue again since the matter was discussed in the House on Monday with a response from Rajnath Singh.Chowdhury then scribbled a few slogans on a piece of paper and gave it to his fellow MPs sitting behind him, who promptly raised them.

The members raised slogans like “Down with dictatorship” (Tanashahi Band Karo), “Stop the politics of poaching” (Shikar ki rajneeti Band Karo Band karo). At this moment, Rahul Gandhi also joined them but merely repeated the last words of the slogans.

On Tuesday, Congress MLA Roshan Baig joined 13 other Congress and JD(S) legislators who have quit the state assembly since July 1, leaving the coalition government in Karnataka tottering on the brink of collapse.