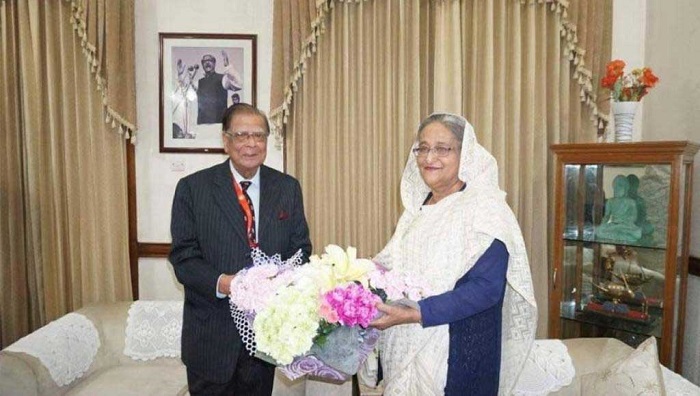 “The making of Enam Ahmed Chowdhury a member of the AL advisory council is a warning of devastating disaster in the field of Bangladesh Politics,” the platform claimed.

Prof AKM Jamal Uddin, spokesperson for the platform Muktijuddho Moncho, came up with the remarks at a press conference at Dhaka University Journalists' Association (DUJA) headquarters on the campus.

In a written statement, he claimed that inclusion of an international criminal like Enam Ahmed Chowdhury in the AL is spreading fears among the people those hold the ideals of Liberation War and Freedom fight, including the Muktijuddho Moncho.

AKM Jamal Uddin, also the professor of Sociology Department of Dhaka University, demanded the expulsion of Enam Ahmed Chowdhury from the AL.

Earlier, senior BNP leader Enam Ahmed Chowdhury was made a member of the Awami League advisory council through a press release issued by the AL on Sunday (July 7).

He joined ruling Awami League in an abrupt turn of events on December 19, 2018 and was a vice-chairman of BNP and an adviser to the party’s Chairperson Khaleda Zia before he resigned from the post.

Former bureaucrat Enam Ahmed was chairman of the Privatisation Commission during the BNP-led government. He had also served as the convener of BNP’s Foreign Affairs Committee.

He wanted to run with BNP’s ticket from Sylhet 1 constituency in 11th parliamentary election. He was in the primary list of BNP nominees, but later left out. BNP then nominated Abdul Muktadir to contest the December 30 general election from that seat.

It is believed that he left BNP after he was rejected candidature from Sylhet 1.