Queen Maxima in Dhaka to promote access to financial services 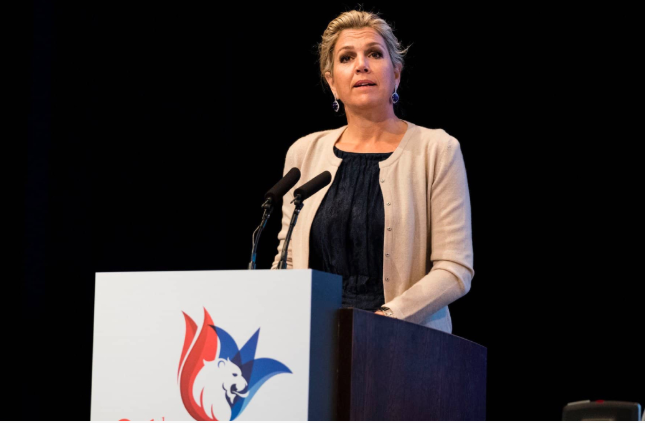 In Bangladesh, only 36 percent of women have bank accounts, compared to 65 percent of men showing a gap of 29 percent (Global Findex 2017).

Queen Maxima, who was appointed UNSGSA in 2009, visited Bangladesh in her capacity as UNSGSA in November 2015.

In her capacity, she advises the UN Secretary-General and works worldwide to make safe and affordable financial services available to all, including low-income groups and small and medium-sized enterprises.

She has been honorary patron of the G20 Global Partnership for Financial Inclusion (GPFI) since 2011.

Queen Maxima will be speaking, among other engagements, about improving women's access to financial services.

Ways of doing this include digitising the salary payments and supporting women entrepreneurs, according to UNDP.

She will also speak about the importance of introducing a national identity system and linking it to digital payment platforms.

The Bangladeshi National Strategy for Inclusive Finance (NFIS) will also be on the agenda.

On Wednesday, Queen Maxima will first meet development partners and representatives of the Fintech sector at the local UN office.

She will then visit a representative of iPay, which has developed the iPay e-wallet that customers can install on their smartphone and use to make online payments.

The Queen's last visit will be to ShopUp, Fintech, a business that helps small enterprises to sell their products via Facebook.

ShopUp also gives advice on running a business and applying for loans to fund business expansion.

On Thursday, Queen Maxima will participate in a roundtable meeting with private sector representatives.

She will then have a series of meetings with Governor of the Bangladesh Bank Fazle Kabir the Minister of Post and Telecommunication Mustafa Jabbar and a delegation from the Ministry of Finance.

Meetings on inclusive finance and the NFIS are also planned with President Abdul Hamid and Prime Minister Sheikh Hasina.

Queen Maxima, who will leave Dhaka on Friday, is visiting Bangladesh at the invitation of the government.

Around 50 percent of adults in Bangladesh have a bank account or use other banking services, compared to only 31 percent  in 2014 (Global Findex 2017).

Despite this increase, still 58 million adults lack access to a current or savings account, insurance policies, loans or digital payments limiting their opportunities for development.