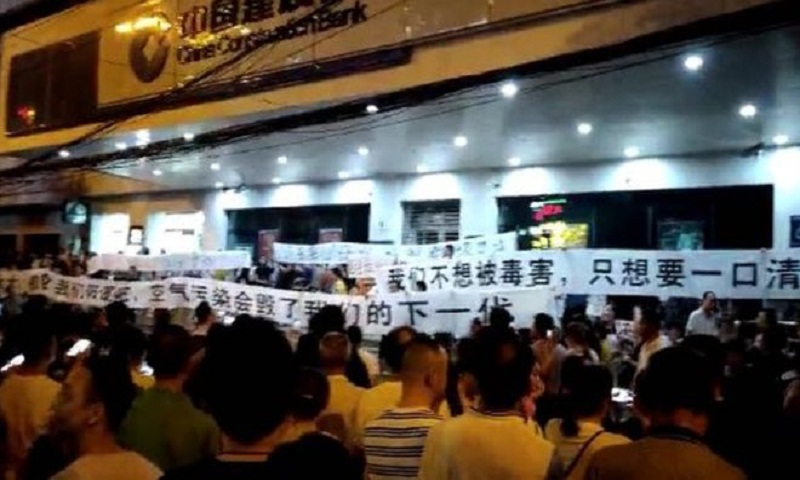 While the world's attention has been focused on the protests in Hong Kong, another Chinese city has been witnessing unrest on a scale rarely seen on the mainland.

Thousands of citizens in Wuhan, the capital city of central Hubei province, took to the streets last week for several days.

They were angry about a planned waste incineration plant they say will bring dangerous levels of pollution to their town.

But as the protests steadily grew over the week, a censorship and public security operation kicked in to try to keep a lid on the unrest.

Why are they so angry?

Wuhan desperately needs to find ways to handle the waste generated by its 10 million residents. So it has drawn up plans for a huge incinerator, to be based in the Yangluo zone of Xinzhou district, where about 300,000 people live.

According to a city government document published in February, the incinerator would possess a daily capacity of 2,000 tonnes of rubbish.

Xinzhou district also already hosts a waste landfill, the strong smells of which, according to some locals, can be caught even when one passes the area on a bus.

But there has been public concern that badly-made incinerators can emit dioxins that are highly toxic and can damage the immune system, interfere with hormones and cause cancer. In 2013, five such plants in Wuhan city were found to be sub-standard and emitting dangerous pollutants, according to China's state broadcaster CCTV.

In late June, rumours began spreading that work had already started on the new plant, on a patch of land in Yangluo designated as an industrial park, close to residences and two schools.

Local people took to the streets for several days, demanding that the location be re-thought. They held banners with slogans like "air pollution will damage the next generation" and "we don't want to be poisoned, we just need a breath of fresh air". They weren't demanding it be scrapped completely, just that it be moved further away.

The protests grew over several days and, according to some locals, the night with the biggest crowds saw up to 10,000 people taking part.

How has the government responded?

At first the Xinzhou district government attempted to calm the unrest. It issued a statement last Wednesday denying that work had started on the incinerator. It said the project hadn't even been registered, nor had it gone through any environmental assessment.

They said the local government would attach "great importance to the voices of the people" in its decision-making, but warned that public security authorities would crack down on any "illegal criminal acts such as malicious incitement and provocation".

Several locals said people were detained but the exact number couldn't be confirmed.

Over the weekend, the authorities appear to have successfully quashed the protests. Some locals said riot police were on the streets and shops around the protest sites had been ordered to shut by 6pm.

Meanwhile, China's censors have been at work. Local voices on social media have been vanishing fast. Videos and photos of the crowded streets and clashes between the protesters and the police can be censored within hours. While there were a few reports in domestic media about the incinerator, none of them covered the protests.

Local people have said they're not satisfied with the district government's reassurances, because it's the municipal authorities who have the final say.

But the municipality has kept quiet so far.

How unusual is this for China?

China often sees public protests like this, but mostly on a much smaller scale.

While the Chinese public have largely avoided protests about political reforms since the Tiananmen movement was crushed in 1989, "not in my back yard" protests related to environmental problems have become more common.

Civil movements against high-polluting projects date back to at least 2007 when a significant protest broke out in Xiamen city of Fujian province against an industrial chemical plant.

The incident became well-known at a time of lighter censorship, and the local government ended up moving the location of the project out of the city.

In 2015 there were protests in both Shanghai and northern Tianjin over planned manufacturing plants which locals felt put them in danger.

And in 2017, Qingyuan city in Guangdong province also saw protests over an incinerator.

During the Qingyuan protests nearly 10,000 locals took to the streets and police reportedly fired tear gas at the height of the unrest. Three days later the government cancelled the planned incinerator.

Even after a week of protests the city government seems deaf to public opinion.