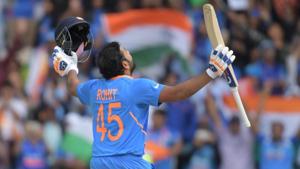 India’s march into the semi-finals has largely been due to the roaring form of Rohit Sharma. 5 centuries in 9 matches and Rohit’s start at the top of the order has been instrumental in India’s dominance. He now has six centuries in the World Cup and level with Sachin Tendulkar. The opener now needs one more ton to be the batsman with the most number of World Cup centuries.

“It’s great that Rohit has been scoring so consistently, which means that coming in the later half of the innings, you have to play a different role, which is controlling the middle overs and letting guys like Hardik (Pandya), Kedar (Jadhav), MS (Dhoni) and Rishabh (Pant) express themselves,” captain Virat Kohli ahead of the match.

Also, there is another Sachin Tendulkar which can be toppled by Rohit. He needs just 27 runs away to go past Tendulkar’s tally of 673 runs in one single edition of the World Cup.

“Rohit said the same thing the other day, that he’s trying to do the best for the team. In that process special things happen,” Kohli said.

“I’m very happy for him and hope he gets two more (centuries) so we can win two more games,” the skipper further added.