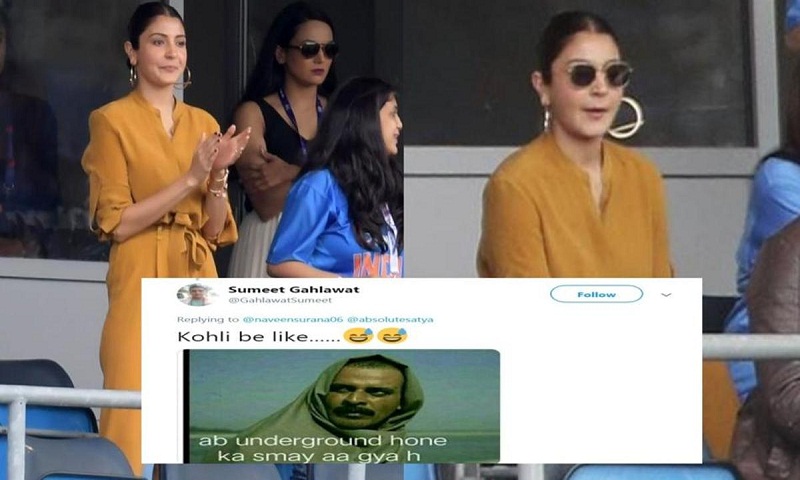 Actor Anushka Sharma is in the UK, giving company to husband and cricketer Virat Kohli who is leading Team India in the ongoing ICC Cricket World Cup. The actor cheered for the team from the bleachers as India won against Sri Lanka and was seen asking one of the friends about the signal for a four. While its okay to not know about the technicalities of the game, Twitter had a field day laughing over the same.

A video of Anushka asking one of those sitting besides her “Is this a four signal?” has gone viral. She is seen making the gesture of the signal which indicates a four (4 runs).

Taking a dig at the actor, a fan wrote, “Wife of Indian Cricket team Captain” with a folded hands emoji. A similar tweet read, “Wife of best cricketer in the world.” Another user wrote, “Kohli ko sahi biwi mili hai. (Kohli has got the right kind of wife).”

Anushka joined Virat during the group stage match between Sri Lanka and India at Headingley in Leeds, northern England on Saturday. She wore a mustard jumpsuit with her hair tied in a ponytail.

Ahead of the match, Anushka and Virat were seen strolling in the city while twinning in white. They had also shared a few candid pictures of their fun moments on Instagram. Anushka had shared one of the pics with the caption, “Seal the silly moments,” as Virat made a funny face for the camera. Virat had shared another picture of them posing with their picture that had the words ‘Mr and Mrs’ attached to it.