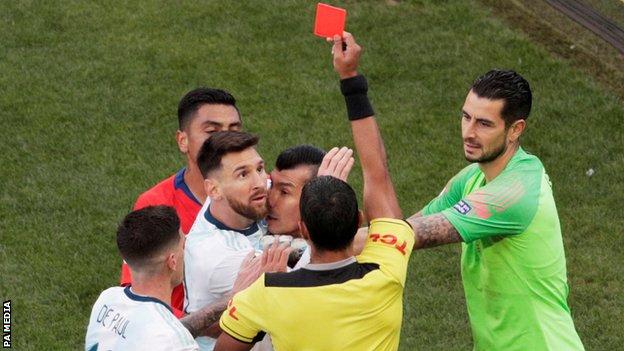 Lionel Messi was shown only the second red card of his career as Argentina beat Chile 2-1 in a hot-tempered Copa America third-place play-off.

The Barcelona forward had provided the assist for Sergio Aguero's opener before Paulo Dybala made it 2-0.

But Messi was shown a red following a clash with Gary Medel, which also saw the Chile player dismissed.

Arturo Vidal scored a second-half penalty but Argentina held off the fightback to secure third place.

However, the big talking point was undoubtedly the sendings off of Medel and Messi - who has never been sent off for Barcelona, and whose only other red card was on his international debut 14 years ago.

Tension had been building as the game wore on in a physical encounter with both sides often giving away niggly free-kicks.

Tempers spilled over eight minutes before half time when Messi appeared to nudge over Medel as they both challenged for the ball.

Medel responded by forcibly pushing his face into Messi's as the two players argued before the referee arrived and dismissed them both.

It seemed harsh on Messi, who in the replays of the incident did not appear to respond aggressively to Medel's action.

Chile had also lost Alexis Sanchez to injury early on. The Manchester United forward appeared to suffer a hamstring injury when chasing a long ball over the defence.

Brazil meet Peru in the Copa America final on Sunday (21:00 BST) and you can follow live text commentary of the game on the BBC Sport website.