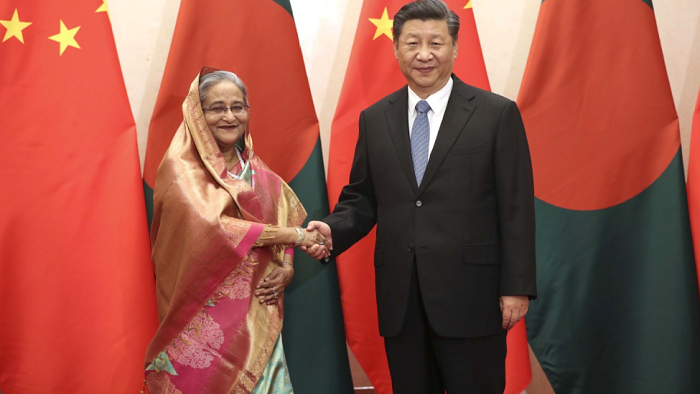 Bangladesh and China— the two time-tested friends— always enjoy excellent relationship since the establishment of their diplomatic ties.

They have always remained trustworthy to each other no matter what has happened in the world. China has never been hesitant to stand by Bangladesh whenever the South Asian nation has gone through a hard time.

Dhaka has also remained committed and given great value to Beijing by ratifying all diplomatic endeavors of China over regional and global issues. This profound friendship has eventually transformed into a strategic partnership between the two countries as Bangladesh joined the Belt and Road Initiative in 2016 when President of China Xi Jinping visited Dhaka. Ever since, China has invested more than $31 billion in different sectors of Bangladesh. It has over 10 billion of investments in the power sector of Bangladesh.

The East Asian nation has also huge amount of investments in other infrastructure projects like building bridges, airports, railways, and highways. Dhaka has also allocated land for Chinese investors to establish an economic zone in southern Chittagong, the commercial capital of Bangladesh.

The much-sought-after visit has brought the two nations much closer and they pledged to further promote their strategic partnership. this visit has equally safeguarded interests of both sides. During the visit, the Prime Minister has categorically ruled out any possibility of her country’s falling into so-called debt trap under the BRI cooperation. She has come up with such a bold and clear statement in a time when a widespread propaganda is active to brand the BRI as a debt trap.

Her statement has vindicated and bolster the Chinese stance over the matter to the rest of the world. Because Bangladesh is an important and active partner of the BRI and its geographical location has made it privileged to serve as a bridge between South and SouthEast Asia. Moreover, Bangladesh and China have vowed to accelerate construction of Bangladesh-China-India-Myanmar Economic Corridor BCIMEC under the BRI. Though this is one of the major and signature projects of the initiative, it has yet to see any headway mainly for Indian reservations.

Therefore, the new promise to speed up its construction by Dhaka and Beijing must be seen as great progress towards its implementation. On the other hand, this visit has also brought great opportunities to Bangladesh. Because the South Asian nation has signed nine instruments with the second largest economy of the world. Best of all, Dhaka has signed five deals with Beijing to improve power transmission and distribution systems in Bangladesh. These deals are much important for the South Asian country as it dreams of becoming a developed country by 2041.

Through these agreements, economists and international affairs analysts are of the view that, Beijing has proven again that it’s a best friend and reliable partner of Dhaka. China is going to invest in the power sector of Bangladesh in a time when the South Asian country needs more than $24 billion of investments in its infrastructure sectors every year to keep its economic wheels running. That’s why this huge amount of Chinese investments in the power sector are seen as a big boon to Bangladesh.

Apart from those five agreements, Bangladesh and China have signed three more memorandums of understanding (MoUs) and a document during the visit. The MoUs are signed on the Establishment of Investment Cooperation Working Group, Implementation Plan on hydrological information sharing of Yalu Zhangbo and Brahmaputra River, and Cultural Exchange and Tourism Program. Analysts believe that these instruments will pave the way for incurring more Chinese investments to different vibrant sectors of Bangladesh and increasing people-to-people exchanges between the two nations contributing to further strengthening of the bilateral ties.

Finally, this visit has opened up new prospects for trade and business between Bangladesh and China. This has also facilitated top leadership of both the countries to reach close understanding of different bilateral and multilateral issues. They mightn’t miss the chance to discuss different aspects of the existing cooperation between Bangladesh and China under the BRI.

As a result, Hasina’s visit to Beijing has been an epoch-making and successful diplomatic development of the region, which has safeguarded interests of both the countries.

The writer is diplomatic correspondent of the Daily Sun. He is now based in Beijing.