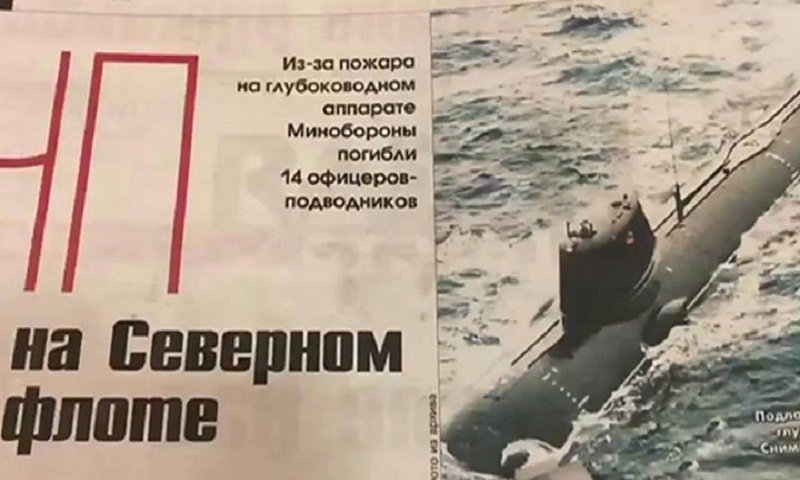 One of the first stories I ever reported on in Russia was a submarine disaster.

In August 2000, two explosions sent the 17,000 tonne nuclear-powered Kursk to the bottom of the Barents Sea and took 118 submariners down to their deaths. I will never forget the sense of national shock and anger at what was widely perceived as a slow response by the authorities, a botched operation to save the crew, and a flood of disinformation around the incident.

President Putin faced personal criticism for not interrupting his summer holidays sooner than he did to deal with the situation.

Nineteen years on, some things haven't changed. Vladimir Putin is still president and Russia's Northern Fleet has suffered another tragedy in the sea: 14 naval officers have died in a fire on a Russian military submersible.

A few hours after the Russian military revealed the accident, President Putin appeared on TV to express his condolences, and despatched his defence minister to the Northern Fleet's main base in Severomorsk.

The official line is that a fire broke out on a "deep-water scientific research submersible" in Russian territorial waters. The vessel had reportedly been "surveying the sea bed". The submariners died from "smoke inhalation".

What is unknown about the disaster?

There are questions that Russian authorities are refusing to answer. What type of submersible? What exactly was it engaged in? The Kremlin won't say.

"Of course, the commander-in-chief (the president) has all the information," President Putin's spokesman Dmitry Peskov told journalists. "But, of course, not all this information can be made public. This is totally classified information. So it's absolutely normal not to reveal this. There is information which is a state secret. This is the interests of the state and state security."

Was there a nuclear reactor on board the damaged vessel? "That's not a question for me," Mr Peskov said. "We're not involved in the construction of vessels."

What was the submersible doing?

In the absence of official answers, Russian media outlets have sought their own. Several newspapers, quoting military sources, identified the stricken vessel as an AS-12 or AS-31 submersible.

These mini-subs can dive up to 6,000m (19,685ft) and are designed to be carried under the belly of a larger submarine. They are operated by the Russian military's Chief Directorate for Deep Water Research - the GUGI - often referred to as the country's "underwater intelligence service".

Russian news websites published what they said were portraits of the 14 victims displayed on a poster, along with the words: "Eternal glory to the heroes! We will remember you always in our hearts!"

Reports emerged that the submariners had served at a military base near St Petersburg. The regional governor of St Petersburg, Alexander Beglov, confirmed that the crew of the submersible was based there.

Churches across northern Russia have been holding services in memory of the dead. It was the same after the Kursk disaster: people lighting candles, laying flowers, saying prayers - trying to come to terms with a tragedy at sea.