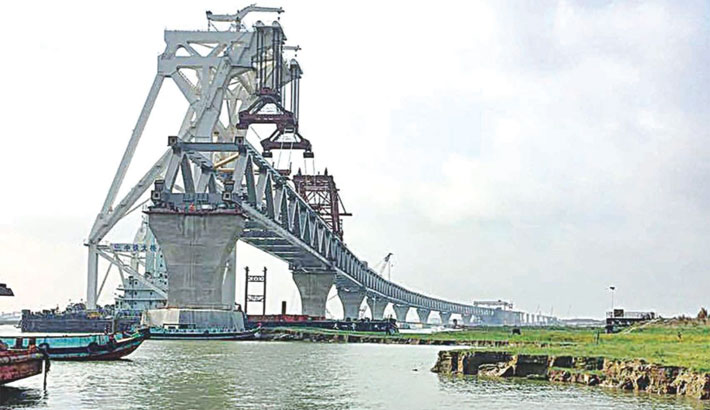 The country’s biggest infrastructure project – Padma Bridge – believed to be the future lifeline of the country’s development – is taking shape rapidly.

Sources said the piling for the Padma Multipurpose Bridge is expected to be completed within a couple of months. Of the total 294 piles, work of almost 285 has been done.

Besides, of 42 pillars, 29 are ready while the rest are expected to be ready within a stipulated time.

With these developments, 14 of 41 spans of the bridge have so far been established. More 10 spans have already arrived from China and the rest will come soon.

With the installation of the 14th span, a total of 2,100 metres of the country’s largest structure is now visible, project officials said.

He also said they are putting focus on the piling work of the project as it is the most challenging one.

The project, which is expected to benefit people of 21 southwestern districts and enhance the country’s GDP by 1.2 percent, was an electoral pledge of the Awami League government in 2008.

After a long tussle with the World Bank regarding the project financing, Prime Minister Sheikh Hasina launched the project work with local money on December 12, 2015 with the target of completing multipurpose structure by December 2018.

After redesigning the pillars, the piling depth for the 22 problematic piers will go down to 98 to 114 metres while most other pilings have a depth of 120 to 130 metres.

Meanwhile, work of the rail link on the bridge also started from late September last year with the installation of box slabs at the lower deck of the bridge’s piers no. 41 and 42.

Once the construction of Padma Bridge is completed, the capital will be directly connected with 21 southern districts via road and railways.

It is believed that the bridge will change the economic landscape of southwestern Bangladesh through opening new vistas of business opportunities.