Why India's Chennai has run out of water 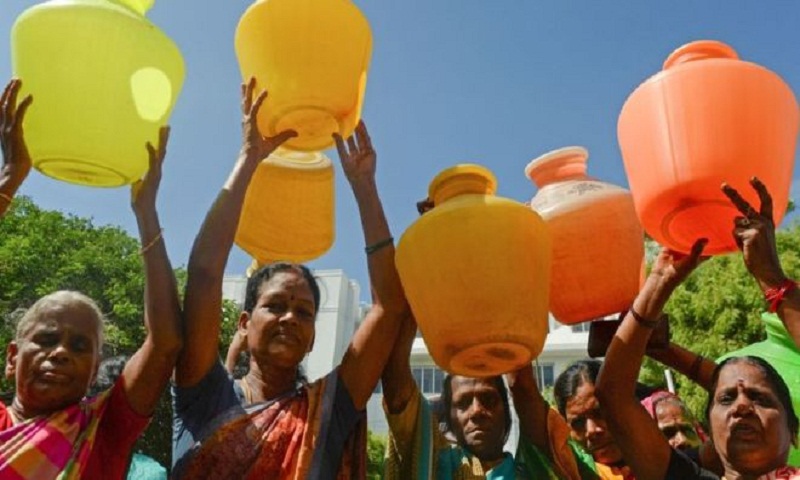 Chennai (formerly Madras), the capital of India's southern Tamil Nadu state, is gaining notoriety as the disaster capital of the world - floods one year, cyclone the next, and drought the year after. But it is not alone. Environmental activist Nityanand Jayaraman explains why.

As I write this, it has rained in Chennai - the first real welcome shower, but one that lasted only 30 minutes. But, still, that has been enough to flood the streets and stall traffic. The irony is that Chennai's vulnerability to floods and its water scarcity have common roots. Blinded by a hurry to grow, the city has paved over the very infrastructures that nurtured water.

The city is no stranger to drought or heavy rains. The north-east monsoon, which brings most of the water to this region in October and November, is unpredictable. Some years it pours, and in other years, it just fails to show up.

Any settlement in the region ought to have been designed for both eventualities - with growth limited not by availability of land but of water. Early agrarian settlements in Chennai and its surrounding districts did exactly this.

Shallow, spacious tanks - called erys in Tamil- were carved out on the region's flat coastal plains by erecting bunds with the same earth that was scooped out to deepen them. Essentially, the infrastructure for water to stay and flow was created first; the settlements came later.

This agrarian logic valourised open spaces. Each village had vast tracts of land, including water bodies, grazing grounds and wood lots, demarcated as Poromboke or commons. Construction was outlawed in the commons. The three districts of Chennai, Thiruvallur and Kanchipuram alone had more than 6000 erys - some as old as 1,500 years.

So rather than transport water over long distances against gravity, early settlers had the technology and good sense to harvest water where it fell.

But this faded with the advent of modern technology.

As urban logic took root, built-up spaces began to be seen as more valuable than open earth. In fact, one could argue that Chennai's date with "zero water" was made in the 17th Century when it was incorporated as a city by Royal Charter. Born a colony of the British, the city rapidly became a coloniser of the countryside.

The British commandeered a small irrigation ery in a village called Puzhal, and vastly expanded its capacity to supply drinking water to the city, in response to the Madras famine of 1876. Renamed the Redhills Reservoir, this was Chennai's first centralised, big-budget drinking water project.

Reliance on a distant water source disconnected residents of the fast urbanising settlement from local water and landscapes. For the urban agenda, this was great as it freed up inner-city water bodies for real estate development.

In the 1920s for instance, the ancient 70 acre Mylapore tank was filled up to create what is now a bustling residential and commercial area called T Nagar.

That tank was part of a larger complex called the Long Tank that extended nearly 10 km (6.21 miles) to the north. Now all that remains of these tanks are thoroughfares named Spurtank Road and Tank Bund Road.

The city has pursued its aspirations to become an economic hub by promoting itself as a major IT and automotive manufacturing centre. In addition to attracting new settlers to Chennai and vastly increasing the pressure on scant resources, these industries have dealt death blows to the region's water infrastructure.

Land-use planning today is a far cry from the simple principles that prevailed in medieval Tamil Nadu.

Wetlands were off-limits for construction, and only low-density buildings were permitted on lands immediately upstream of tanks. The reason: These lands have to soak up the rainwater before letting it to run to the reservoir.

It is this sub-surface water that will flow to the lake as the levels go down with use and time. Unmindful of such common sense, the IT Corridor (a road which houses a large number of IT companies in the city) was built almost entirely on Chennai's precious Pallikaranai marshlands.

And the area immediately upstream of Chembarambakkam - the city's largest drinking water tank - has now been converted into an automotive special economic zone (SEZ).

Other water bodies have been treated with similar disdain.

The Perungudi garbage dump spreads out through the middle of the Pallikaranai marshlands.

The Manali marshlands were drained in the 1960s for Tamil Nadu's largest petrochemical refinery. Electricity for the city comes from a cluster of power plants built on the Ennore Creek, a tidal wetland that has been converted into a dump for coal-ash.

The Pallavaram Big Tank, which is perhaps more than 1,000 years old, has over the last two decades been bisected by a high-speed road with the remainder serving as a garbage dump for the locality.

In Chennai, the water utility supplies are barely a fourth of the total water demand. The remainder is supplied by a powerful network of commercial water suppliers who are sucking resources in the region dry.

Along the periphery of Chennai, and far into the hinterland, the land is dotted with communities whose water and livelihoods have been forcibly taken to feed the city. The water crises in these localities desiccated by the city never make it to the news.

The world won't change unless we replace capitalism with other ways of doing business that are not premised on the exploitation of nature and people.

Our dominant economic model, with its blind faith in technology, is doomed.

Modern economy views open, un-built land as useless. It believes that value can be extracted from such lands only by digging, drilling, filling, mining, paving or building on it.

Degrading land use change is colliding with climate change in all the modern city's of the world, exposing their vulnerabilities.

Chennai's struggles with water - be it flooding or scarcity - cannot be addressed unless the city re-examines its values, and how it treats its land and water.

Further growth and more buildings are not an option - it needs to actively shrink in size instead.

By ushering in policies to promote land-friendly economies in the state's hinterland, the government can make it easier for people to migrate out of the city in a planned and feasible way.

Although difficult, this would be less painful than what would happen if they were to wait for nature to do the job.