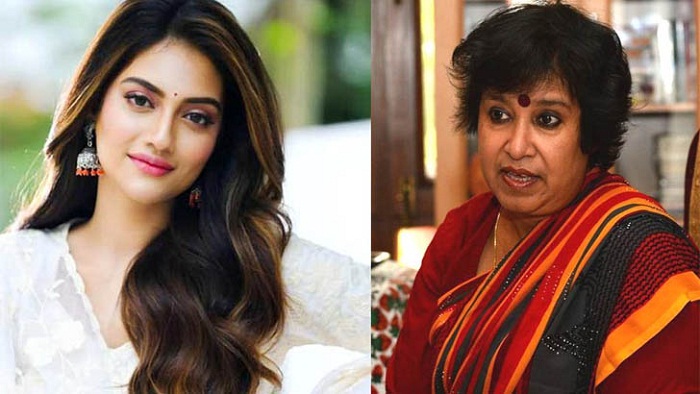 Taslima Nasrin, the exiled Bangladeshi writer in India, spoke in support of Tallywood star Nusrat Jahan who has been on the spotlight for last few months over couple of issues.

Earlier, she came to discussion for her debut in politics. She took part in the last national election of India and won the seat of Bashirhat with the ticket of Trinomul Congress.

But this time she came into controversy for her name, Nusrat Jahan Ruhi Jain, which became intolerable for the Deoband’s Islamic group ‘Darul Ulum’. The Imam Mufti Asad Wasmi of the group commented on Nusrat’s activity and said - ‘absolutely unacceptable’.

Especially, Nusrat has been harshly criticized for her attire with vermilion and ‘Mangalsutra’ at the oath taking ceremony in Indian Parliament last week.

Asad Wasmi again criticized Nushrat over the matter and said, “This is absolutely unacceptable in Islam.”

Some of the BJP leaders, including the Hindu hardliners, came out to criticize the Wasmi remarks.

Now, writer Taslima Nasreen has supported Nusrat and tweeted, “Nushrat Jahan, a Muslim, married Nikhil Jain a non-Muslim. Had Hindu wedding rituals. None was converted to other’s religion. But Deoband’s clerics are angry. They want non-Muslims get converted to Islam before marrying Muslims. Fuck’em. Say YES to interfaith marriage & NO to conversion”.