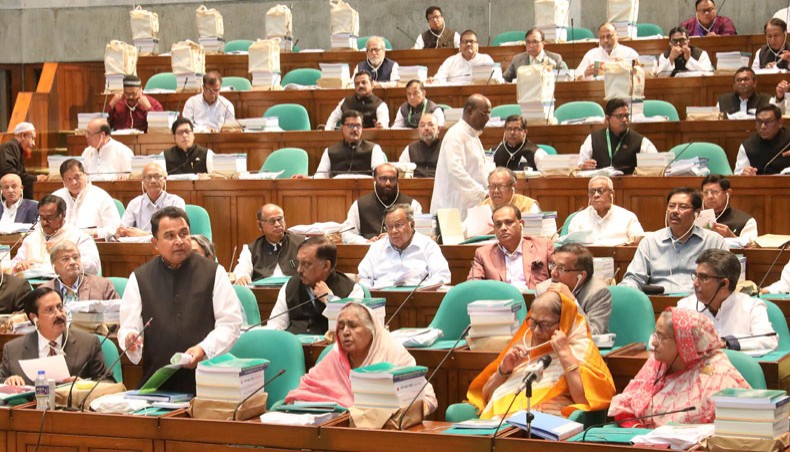 Parliament on Sunday passed the Tk 5,23,190 crore national budget for the fiscal year 2019-20, themed as ‘Bangladesh on a Pathway to Prosperity: Time is Ours, Time for Bangladesh’.

Following the proposal mooted in the House by the Finance Ministry for the parliamentary approval of appropriation of fund for meeting necessary development and non-development expenditures of the government, the ministers concerned placed justifications for the expenditures by their respective ministries, through 59 demands for grant.

Earlier, parliament rejected by voice vote a total of only 484 cut-motions that stood in the name of opposition members on 59 demands for grants for different ministries.

A total of nine MPs from Jatiya Party and BNP submitted their cut-motions on the budget.

They were allowed to participate in the discussion on Secondary and Higher Education Division, Health Ministry, Agriculture Ministry and Disaster Management and Relief Ministry.

Later, Speaker Dr Shirin Sharmin Chaudhury applied guillotine to quicken the process of passing the demands for grants for different ministries without giving the lunch break.

Opposition and independent MPs were present at the House when the Appropriation Bill was passed in parliament and they did not raise any voice against passing of the bill.

Finance Minister AHM Mustafa Kamal on June 13 placed a Tk 5,23,190 crore largest-ever budget for the 2019-20 fiscal with a focus on developing communications infrastructure and human resources and achieve the 8.2 percent GDP growth.

The overall budget deficit will be Tk 1,45,380 crore, which is 5 percent of GDP like the previous year. In financing the deficit, Tk 68,016 crore will come from external sources and Tk. 77,363 crore from domestic sources.

Of the financing from domestic sources, Tk 47,364 crore will come from the banking system and Tk 30,000 crore from savings certificates and other non-bank sources.

The total allocation for operating and other expenditures is Tk 3,20,469 crore, and allocation for the annual development program is Tk. 2,02,721 crore, while Tk 100 crore has been proposed to provide startup capital to promote all types of startup enterprizes among youths.

A total of Tk 1,23,641 crore has been proposed for general services, which is 23.63 percent of total allocation. Tk. 33,202 crore is proposed for public-private partnerships (PPP), financial assistance to different industries, subsidies and equity investments in nationalized corporations, banks, and financial institutions.

The budget also proposed introducing insurance for the expatriate Bangladeshi workers and their families as they often face financial losses and risks due to accidents and various other causes.

For the sake of a strong capital market which is required for any strong economy, the Finance Minister proposed making tax free the dividend income from the listed companies' up to Tk 50,000.

Along with the standard VAT rate of 15 percent, there will be reduced rates of 5 percent, 7.5 percent and 10 percent for specific goods and services. As a special measure, considering the sensitivity of the product, the rate of VAT at the trading stage of pharmaceutical and petroleum products shall be 2.4 percent and 2 percent respectively.

A total of Tk 79,486 crore was allocated in the proposed budget for the education and technology sector, which was 15.2 percent of the Tk 523,190-crore budget.

The Finance Minister said necessary funds have been earmarked in the proposed national budget for 2019-20 fiscal year for enlisting new schools in the Monthly Pay Order (MPO) scheme which remained suspended for a long time.

Earlier on Saturday, Parliament passed the Finance Bill 2019 with some changes in the proposals over the capital market, VAT and handloom industry, and scrapping the opportunity to invest black money to buy land.

The proposal for legalising undisclosed money through investing in land was proposed in the Finance Bill 2019, placed in parliament on June 13.

Parliament also reduced tax on retained earnings and reserves of companies to 10 percent from initially-proposed 15 percent in the face of outcry from businesses, who argued that the step would discourage business expansion and investment.

It also passed the proposal to cut tax on stock dividend to 10 percent.

The House also passed the proposal that listed companies would give 30 percent of its net profit as stock and cash dividend. If any company fails to do so, it will have to pay 10 percent tax on retained earnings and reserves.

In the budget proposal, the government sought to slap 15 percent tax on the retained earnings and reserves of a company if the amount exceeds 50 percent of the paid-up capital. It also said stock dividend by listed companies will be subject to 15 percent tax.

Parliament also passed a proposal to impose specific tax at Tk 4 on each kilogram of yarns used by weavers instead of previously proposed 5 percent VAT.