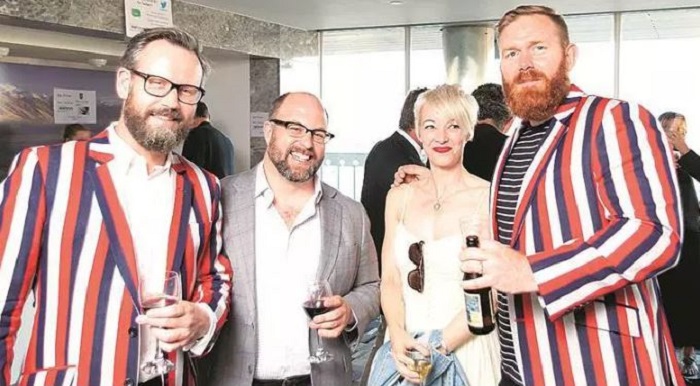 “Oi! Kiwis in London — It’s a top of the table clash this Saturday. How do you fancy a friendly wager? How ’bout this … loser has to change their profile pic to someone from the other country for a WEEK … Our suggested profile photos are below – annoyingly we actually love most of your cricketers but we think we have come up with a workable solution … You in?”

David Warner is a suggested photo for the profile swap. It’s from the group ‘Aussies in London’, and as the post suggests, there is a pretty decent bonhomie between the two communities in London. The other group, “Kiwis in London” have not only shared that with their members but have also thrown a friendly offer to the Aussies. At 9.30 pm on Friday, the night before the game, at a night club called Infernos at Clapham Common, the Kiwis are throwing a party – drinks and dance, and Aussies are welcome to join.

It’s still a few hours to go for the club and you see a couple at a coffee shop nearby. Waiting for the fun to begin. Next morning, they say, a breakfast has been arranged at the Globe pub at Baker street, close to the fictious home of Sherlock Holmes. It’s an 1.00 pm game, and so there is enough time to meet up with the fellow Kiwis and get their act together before they would walk down the road to Lord’s.

Both groups are social clubs that help people from their respective countries to settle in the new country. Job offers are put up – from accommodation help (they even have their own apps where fellow countrymen can look for houses on rents and temporary accommodation) to job offers (from carpenters, banqueting staff to work in financial services) and of course social events. You notice that many job offers are for Kiwis and Aussies — in the United Kingdom, the two countries seem to be hyphenated entities.

Just when you think it’s all mushy, you hear a wisecrack. “We can provide them with sandpapers!” laughs Josh Wright, the chairman of New Zealand Cricket Club, London’s possibly only Kiwi cricket club. Established in the years after second World War, the club has been all things to people from New Zealand: Comfort away from home, help with immigration and visa, tips to get driving licence, ways to get best Kiwi cuisine, a social club of sorts, and of course cricket on Sundays that binds them all. “Cricket is just an excuse to get us all together.”

Couple of days after they landed in London, the New Zealand cricketers were thrown a function by LNZCC members. “They are all laidback, friendly guys,” says Wright. “And we don’t disturb them with cricketing pressure – just a get-together, easy talk, help them ease into this country before a campaign and I think they quite enjoyed the evening. Every two years, we throw a function like that and usually invite the Black Caps.” It wouldn’t have been tough as not only is the club linked with the New Zealand embassy in London but internationals like Hamish Marshall have played for them in the past.

“LNZCC used to play matches against an Australian cricket team put up by the Australia House until recently but they slipped up in their cricket and have gone down. The team has been resuscitated,” says Wright, who can’t wait to have a crack at the Aussies. “Those were always special games for our club. Banter and rivalry – and then lots of drinks afterwards.” Perhaps, just like the two national teams.

“Kane Williamson couldn’t be more different than Brendon McCullum,” says his batting coach David Johnston, who has known him from the age of 10. “He is very understated and a ‘follow-me’ sort of a leader who would lead by example. Not too many words. A lot of players in the team would find themselves inspired to follow his lead – try achieve the bar he sets, work harder. He is a very level-headed chap with great understanding of the game. People think he might be shy or reserved and make their opinions based on that perceptions but All through his life, he has been the captain in various sports. So, it sort of comes naturally to him and he is at home as a leader. It isn’t something new,” Johnston told this newspaper. “There is no one in the team who doesn’t like Kane.” As if there is anyone out there, elsewhere, who doesn’t like him.

Wright, the LNZCC chairman, says it’s a matter of pride that Williamson is leading the country. “He is a dignified man, isn’t he? Quiet, calm, collected – and we like that about this team.” Aaron Finch has likewise shown already in this tournament that he is a captain to be reckoned with. In the early games, he almost had just two bowlers Mitchell Starc and Pat Cummins but he marshalled the resources brilliantly, and created an illusion to the opponents that they were always facing one of the two in the middle overs. He juggled them well, rotated the bowling, and kept using them in short spells.

Finch, who has Big Bash tournament as a captain, is also someone who has led various teams over the years. The only change he said he has made in the recent years was to listen to his team-mates suggestion to speak less. “They told me I speak too much in the meetings. So these days, I listen more. Stay quiet and if I have really something to say, then I speak up in the meetings.” In other words, Finch is tending towards Williamson, in some ways.

Though New Zealand lost their last game to Pakistan, it could well be put down to the misreading of the pitch – they went in with just one spinner on a turner where Williamson himself had to bowl 8 overs. So they won’t be unduly worried about that loss. In fact if anything, the way Jimmy Neesham and Colin de Grandhomme revived the innings from a semi-crisis would have given them great hope. No longer do they have to rely too much on Williamson or Ross Taylor.

Similarly, as the tournament has progressed, Australia have kept getting better. Now, Nathan Lyon has stepped in, the middle order is looking good and they have Starc to turn near-losses to wins. It would be a clash between two teams who are slowly filling up holes and erasing weaknesses as they advance.

“The Lord’s match pitch is very green. I saw a picture.” That’s not from a New Zealand or an Australian player but from Josh Wright. Someone from the LNZCC club, associated with the Middlesex cricket, has sneaked up to the centre pitch at Lord’s and taken a photo.

When he landed up in UK, Wright wasn’t keen to socialise with fellow Kiwis, thinking he should instead fit in with the locals. But as years went by, he was drawn to it, mingling with fellow kiwis, finding the occasional Aussie or South Africans to hang out with. “It just made sense. Home away from home, we help each other out a lot. Most of our club members are accountants or from financial services or lawyers.”

The club goes to Spain every year to play cricket against Ibiza Cricket Club, the highpoint of LNZCC’s yearly calendar. Four days of bacchanalia in Spain, what’s not to like about it?