This rock-eating ‘worm’ could change the course of rivers 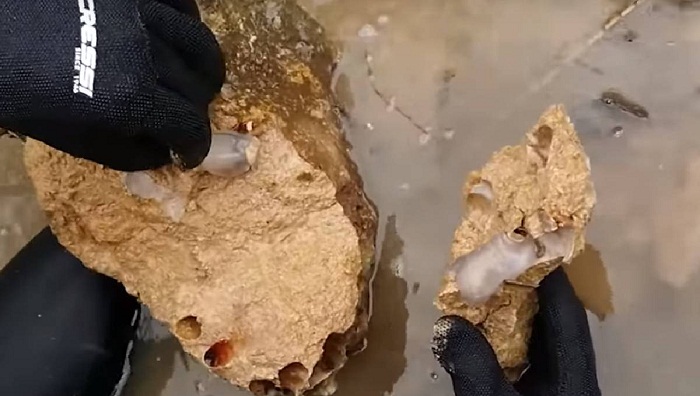 Shipworms have long been a menace to humankind, sinking ships, undermining piers, and even eating their way through Dutch dikes in the mid-1700s. Now, researchers have found the first shipworm that eschews wood for a very different diet: rock, reports Science Magazine. The new shipworm—a thick, white, wormlike creature that can grow to be more than a meter long—lives in freshwater. Researchers first spotted the species (Lithoredo abatanica) in 2006 in thumb-size burrows in the limestone banks of the Abatan River in the Philippines. But it wasn’t until 2018 that scientists were able to study the organism in detail.

The rock-eating shipworm is quite different from its wood-eating counterpart, the team reports today in the Proceedings of the Royal Society B. Really clams, all shipworms have two shrunken shells that have been modified into drill heads. Hundreds of sharp invisible teeth cover the shells in the wood eater, but the rock-eating shipworm has just dozens of thicker, millimeter-size teeth that scrape away rock.

Marine shipworms store the wood they eat in a special digestive sack, where bacteria degrade it. Like other shipworms, the rock-eating shipworm still ingests what it scrapes away to make its protective burrow, but it lacks both the sack and its bacteria and likely doesn’t get much sustenance from the rock bits. Their ingestion may be a holdover from wood-eating ancestors. Instead, it seems to rely on other bacteria residing in its gills to produce nutrients or food sucked in by a siphon at the clam’s back end for nourishment.