A Look Back at Cricket World Cup History 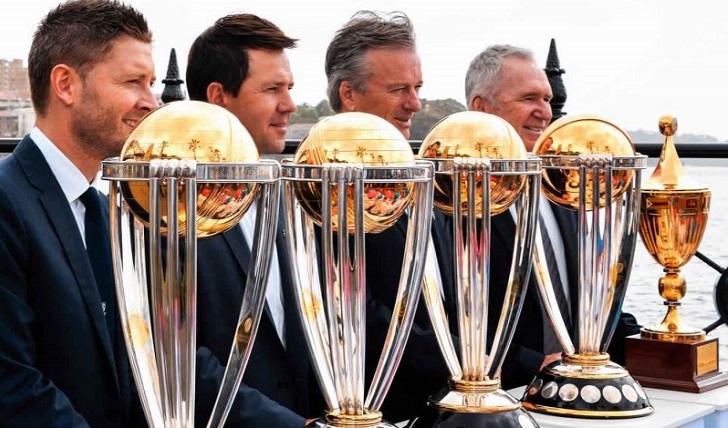 My earliest memories of world cup cricket go back to 1996. The tournament was held in India, Pakistan and Sri Lanka. Because of security issues, West Indies and Australia refused to travel to Sri Lanka and forfeited their matches against Sri Lanka. It helped the tiny island to accrue four points without having to play those scheduled matches in the group phases. Under the captaincy of Arjuna Ranatunga, Sri Lanka required to beat England in the quarter finals, India in the semi-finals and Australia in the finale to win the coveted tournament. Bangladesh was not qualified to play in 1996 Wills Cricket World Cup. Many of us rooted for other teams. Bangladeshis were mostly divided between India and Pakistan. I used to support India at that time. Sachin Tendulkar was my favourite player. It was painful for me to watch India being knocked out of the tournament in semi-finals that year. Interestingly, after the world cup, we found people supporting Sri Lanka. Sri Lanka won the tournament in a swashbuckling style.  Everyone was trying to emulate Sanath Jayasuria who popularided the idea that batsmen need to keep wickets intact but score quick runs in the first fifteen overs. At that time, only two players were allowed to keep outside the 30 yard circle in the first fifteen overs. The Lankan bastmen cashed in to score more runs playing lofty shots and piercing through the gaps within that time-frame. They would score ones and twos in the middle overs. The slog overs would see them in a rampant mood.

Sri Lanka's rise from bottom to top was inspiring for our players too. 1997 was the year that turned out to be the most fascinating year in our sporting calendars. Bangladesh had to reach the final of International Cricket Council (ICC) qualifiers to qualify for 1999 Cricket World Cup. The Akram Khan led Bangladesh team not only reached the final, they also beat Kenya in a cliffhanger. Kenya was no pushover at that time. The rain-truncated match brought out the best between both teams. Finally, Hasibul Hasan Shanto and Khaled Masud Pilot played match-winning knocks in the finale. In one of the knockout games, Akram Khan played a match-winning knockout against the Netherlands. His knock of 68 steadied Bangladesh's ship from early wobbles. The loss against the Netherlands would have stagnated our cricket development.

1999 was a proud year for us. It was our first time as participants in cricket world cups. The current selector Minhazul Ahmed Nannu was not selected for that tournament. It led to a huge public outcry. People demanded his selection. Bangladesh Cricket Board had to change their stance for enabling Nannu to play in the world cup where he scored a couple of wonderful fifties. Thus, he proved his critics wrong. At that time, Bangladesh was a hangover against much stronger opponents. One realistic chance of our team winning was the match against Scotland. But Bangladesh surpassed all expectations and won two matches in the group stage. Although we were not qualified for the Super Six stage, the nation was still proud of our achievement. Beating Pakistan in our final match was a cherry on top of the cake which we baked by beating Scotland. If Manjurul Islam had not touched his hand in his bowling follow-up, the Scottish batsman Gavin Hamilton would have taken the game away from us. Gavin Hamilton was the rock among his peers. Wickets were tumbling around him. But he had stood strong but been run out unfortunately. His half-century was not enough to bring a victory for Robert Bruce's country. By beating Scotland, Bangladesh got their first taste of victory in a world cup match. Australia won that world cup held in Great Britain and Holland.

Their victories transformed cricket in Bangladesh from a hobby into serious professions for many youngsters. Prime Minister Sheikh Hasina gave our heroes of 1999 world cup cricket tournament honorariums and acres of lands. Our players were receiving better wages.

In the 2003 world cup, our players performed poorly. We could not win a single match. The team had many talented players but they could not gel as a team to bring victories for the nation. The losses against Canada and Kenya in that world cup are still bitter pills to swallow. Thankfully, Dav Whatmore was hired following that poor world cup. He galvanised our players. That resulted in better performances from us in 2007 Cricket World Cup in which Bangladesh knocked out India and defeated South Africa in the Super Six stage. Unfortunately, we lost against Ireland. The win against India was sweeter. The Indian media was going over the top. They were dreaming of winning the world cup. Bangladesh put a dent on their hope. We have more Indian channels in our country. Their sports channels beef up their teams' performances so much so that many people from our country are exasperated with them. We get more fun in seeing India lose.

Although Bangladesh did not play in their home-turf, we expected them to play better. Specially, they should have beaten West Indies then. Instead, Bangladesh were knocked out twice in the score of 58 against South Africa and West Indies. Beating England in Adelaide in 2015 was memorable. England were out of the competition. That embarrassing loss made England review their performance. They changed their conservative approach. Now England are a gung-ho team ready to take on the bowlers without having the fear of getting out. England have already lost two matches on the day of my write-up (22 June 2019). Whether the English approach is right or not, only time will say.

Australia won the world cups five times. I think, they are favourites to win again. England are hoping to create general interests in cricket among football crazy supporters. They are hoping that winning the tournament will propel them to win over new supporters. India are one of the favourites but they are over reliant on Virat Kohli, Rohit Sharma and Hardik Pandya. M.S. Dhoni has lost his touch. New Zealand is the underdog. On their day, they punch above their weight.

Bangladeshi players have been giving their best. They have not lost without putting up a stiff resistance. Our supporters should treat cricket only as a game. We tend to become irrational with our supporting styles. Players are representing our country. They don't lose games at their will. Cricket is a sport. Their will be winners and losers. We will win someday and lose someday. We will praise their performance and criticise their performance. There should not be any personal attacks. We should not bring players' families, religions and political views while evaluating their deeds. Patriotism does not lie in wearing green and red on our faces. It has more to do with doing our best from our position to develop our country. Lest we not forget, our players represent our nation. They have put our country on the global map. Our players are human beings. They are made of flesh and blood. Let us not elevate them to a divine status when they win and fling them into a gorge when they lose.

Win or lose, they are tigers. We are the tigers. Our citizens who support the culture and spirit of the nation are tigers – others are hyenas.