Why Europe is sizzling in an unusual heatwave 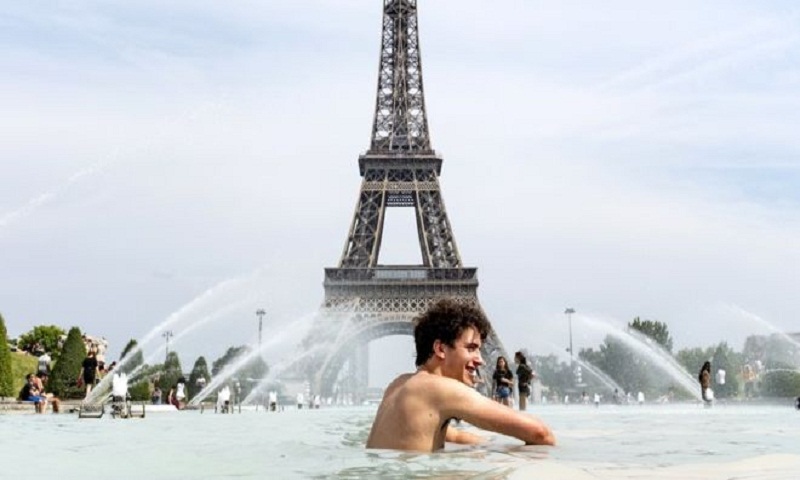 Countries across Europe are bracing for record-breaking heat and issuing health alerts, urging people to keep cool, as sweltering temperatures are expected to intensify across the continent.

The heatwave has already caused flash floods and forest fires, grounded planes and buckled train tracks and led to school closures and warnings over air quality.

France has set up temporary water fountains in built-up areas and is allowing public pools to open late into the night. In Germany, people are filling hot water bottles, placing them in freezers and then taking them to bed.

As the mercury continues to rise - with potentially deadly consequences - experts tell the BBC what is behind the heatwave.

Why is this happening now?

Heatwaves occur across northern Europe when high atmospheric pressure draws up hot air from northern Africa, Portugal and Spain, raising temperatures and increasing humidity. In this instance, the exceptionally hot air has come from the Sahara.

Heatwaves are not uncommon, but according to weather experts they are being amplified by a rise in global temperatures and are likely to become more frequent - one of the more predictable impacts of our warming climate.

A climate specialist at the UK's Meteorological Office, Grahame Madge, told the BBC that, while weather variations occur naturally, the world was around one degree warmer than pre-industrial levels and, as a result, extreme weather was becoming more likely.

"Now when we get a heatwave, it is likely to be a degree or so more," he said. "They are still extreme events, but they are also becoming more frequent."

The highest recorded temperature in Europe - 48C (118.4F) - was measured in Athens in July 1977, but on average the 20 warmest years since records began have all been within the past 22 years. The years 2015-2018 make up the top four, according to the World Meteorological Organization (WMO).

Is the warming caused by human activity?

A scientific study into last year's Europe-wide heatwave by the World Weather Attribution group concluded that high temperatures in the region were made more likely by human activities that contributed to climate change.

If the current trend were to continue, heatwaves across Europe could occur as often as every other year by the 2040s, with the possibility that temperatures may rise by 3-5C by 2100, the report said.

What exactly is a heatwave?

There is no universally accepted definition of a heatwave, due to variations in climate conditions in different world regions. Typically though, they are defined by an unseasonably hot period - usually five degrees or more above the average daily maximum - that lasts at least three days.

Other factors considered by analysts, Mr Hewson said, included night-time temperatures, humidity and wind speed. Both humidity and low wind speeds can enhance a heatwave. The effects can be particularly extreme in large cities due to increased human activity and a mass of buildings, concrete and roads.

"In terms of the time of year and spatial pattern of warmth, the ongoing event in Europe is quite similar to the 2015 European heatwave," Mr Hewson said.

The most severely affected areas during that heatwave were southern and central Europe, but there were also temperature records set in Germany and Switzerland.

Why are heatwaves dangerous?

Higher temperatures can affect anyone, but dehydration, heat exhaustion and heatstroke can have a deadly consequences for people who suffer from cardiac, kidney and respiratory diseases as well as the elderly and infants.

"Heatwaves can be dangerous because they reduce the capacity of the human body to regulate its own temperature, to keep it at safe levels," Mr Hewson said.

Health professionals advise that anyone experiencing headaches, dizziness, loss of appetite, nausea, excessive sweating, cramps, fast breathing or intense thirst should try to find a way to cool off.

If a person's body temperature rises above 40C (104F), heat stroke can set in, which requires urgent medical help. Danger signs include sweat stopping and breathing difficulties. Heat stroke can lead to loss of consciousness and serious complications, including permanent damage to vital organs or even death.

After the 2003 heatwave, about 70,000 additional deaths were recorded compared with previous years, according to the National Center for Biotechnology Information (NCBI).

What happens in hotter countries?

Nations with hotter climates, such as Australia and countries in North Africa and across the Middle East - where summer temperatures can often reach 50C - can still struggle with extreme weather.

"Their infrastructure might be able to cope with higher temperatures in general, but with anything away from the norm, everywhere struggles," Mr Madge said.

When asked how they keep cool in extreme heat, BBC colleagues living in Nigeria, Tanzania, Yemen and Brazil had the following advice for countries with more variable climates:

Clothing: Wear something loose and light, both in weight and in colour

Towels: Carry a small flannel to soak in water and daub your face

Ventilation: Open windows and use fans