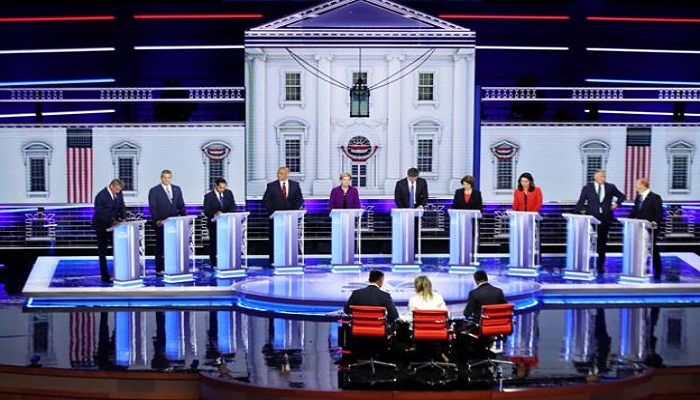 Ten Democratic candidates have faced off in the first TV debate of the race to oust President Donald Trump from the White House next year.

Elizabeth Warren, a liberal firebrand who has been gaining momentum, took centre stage at the primetime forum in Miami, Florida.

The debate offered much-needed political oxygen to underdogs such as Cory Booker and Beto O'Rourke.

Ten other Democrats in the crowded field will battle on Thursday night.

Millions of voters were expected to tune in for America's biggest political debates in years. The first began at 21:00 (01:00 GMT) on Wednesday and lasted two hours.

Who was first up?

Ms Warren, a Massachusetts senator, was looking to cement her surge in opinion polls after unveiling a plethora of policy proposals such as free universal healthcare, higher taxes on the rich and breaking up tech giants.

"Who is this economy really working for?" she said in response to the first question. "It's doing great for a thinner and thinner slice at the top."

She attacked drug and oil giants and prison contractors before concluding to a big cheer from the studio audience: "We need to make structural change in our government, in our economy and in our country."

The Massachusetts senator drew more applause as one of only two contenders on stage, alongside New York Mayor Bill de Blasio, to say she supports government-run healthcare.

An impassioned Ms Warren said: "There are a lot of politicians who say, 'oh, it's just not possible'… what they're really telling you is, they just won't fight for it.

The other nine candidates on stage vied to grab some crucial limelight.

Mr O'Rourke was first to show off his command of Spanish, saying that a stable American democracy should "listen to all voices".

The former congressman became a liberal golden boy during an unsuccessful Senate bid last year, but his White House hopes have so far fizzled.

Mr Booker, the New Jersey senator, was the only candidate who did not raise his hand when asked whether he would sign back on to the 2015 Iran nuclear deal as it was originally negotiated under the Obama administration.

They are all at one per cent or lower in opinion polls.

Asked about a photo of a migrant father and daughter who drowned trying to reach the US, Mr Castro was cheered when he said their deaths were heartbreaking and "it should also piss us all off".

In one of the sharpest exchanges of the night, he clashed with fellow Texan Mr O'Rourke, telling him he should "do your homework" on immigration.

When Mr Inslee talked up his record on reproductive rights, Ms Klobuchar drew applause for retorting: "There's three women up here who have fought pretty hard for a woman's right to choose."

Ms Inslee recovered later when asked by a moderator what is the biggest geopolitical threat to the nation, and he replied to loud acclaim: "The biggest threat to the security of the United States is Donald Trump."

Mr de Blasio distinguished himself on a question about gun violence, saying: "There's something that sets me apart from all my colleagues running in this race and that is for the last 21 years I've been raising a black son in America."

He said his son, Dante, has to use "special caution because there have been too many tragedies between our young men and our police".

All the top 20 candidates need to demonstrate they have the electoral viability and political grit to defeat the Republican president.

What was the president's reaction?

Mr Trump, who is running for a second year in office, seemed unimpressed as he watched the debate aboard Air Force One en route to Japan for a G20 summit.

He unleashed on the debate host after it cut to a commercial break halfway through because of a glitch with the microphones.

Who debates on second night?

Front-runner Mr Biden, a former US vice-president making his third White House bid, is a pragmatic centrist who is regaining his footing after gaffes and about-turns.

Snapping at his heels is Mr Sanders, a Democratic socialist who is promising a "political revolution" of economic populism, including free healthcare for all and paying off America's $1.6tn student debt mountain.

Youthful mayor Pete Buttigieg, whose dark horse campaign has been rocked by the police shooting of a black man in his home city of South Bend, Indiana, will also be closely watched.

Senator Kamala Harris, the only black woman in the race; Senator Kirsten Gillibrand, who has campaigned on women's issues; and entrepreneur Andrew Yang will also be jockeying for attention.

The line-up for both nights was chosen at random by debate host NBC.

The challenge for contenders will be to shine in a field that is largely aligned in opposition to Mr Trump on hot-button issues such as immigration and climate change.

But there are divisions among them on other thorny topics like whether the president should be impeached, or how to tackle America's healthcare system.

The eventual Democratic White House nominee will be crowned at the party convention in July next year, before the presidential election in November.