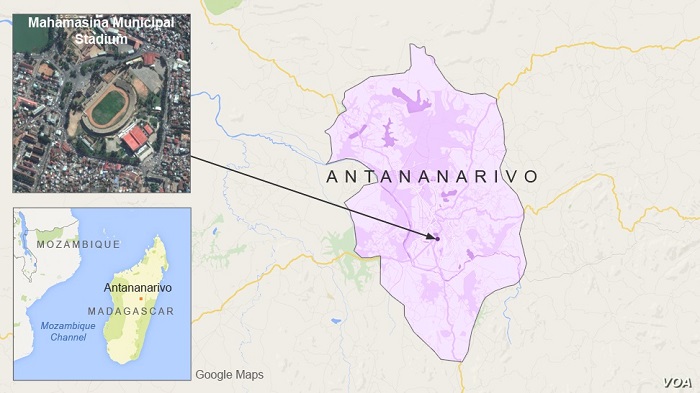 A stampede at a concert in Madagascar's capital by a popular singer killed at least 15 people Wednesday night.

Just before the start of an appearance of the artist Rossy, the crowds surged causing the deaths from trampling, said the national police. Some 80 people were injured.

"The show was about to start and people heard that they could enter the stadium but the police had left the doors closed. People tried to force the doors but they remained closed. The crowd kept pushing. People fell and at least 15 have died," said Gen. Richard Ravalomanana, in charge of the National Gendarmerie.

The death toll is likely to increase because several of the wounded are in critical condition, said Professor Olivat Rakoto Alson, director of Joseph Ravoahangy Andrianavalona Hospital, where the dead and injured were taken.

The tragedy occurred as Madagascar was celebrating the 59th anniversary of its independence. Rwandan Head of State Paul Kagame was the guest of honor of President Andry Rajoelina for the occasion. Earlier Wednesday afternoon they attended a military parade in the same Mahamasina stadium.

This is the second recent deadly incident at the stadium. In September last year during a soccer match between Madagascar and Senegal, a crowd stampede at the entrance of the stadium killed one person and injured 37.