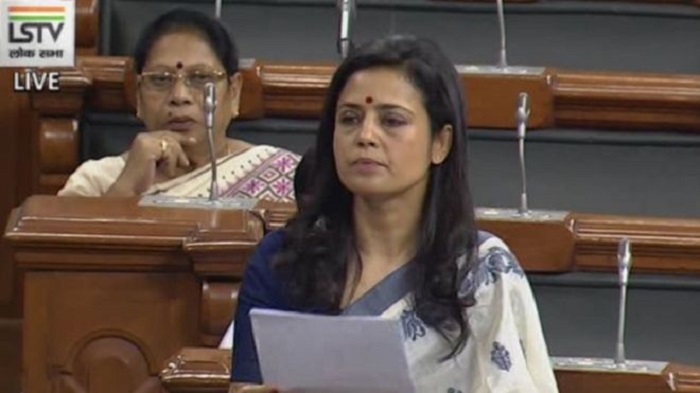 A spirited turn at the mic by a first-time female MP in India's parliament, in which she listed the "signs of early fascism", has been hailed as the "speech of the year" on social media.

Mahua Moitra, of the opposition Trinamool Congress Party (TMC), said she had seen a list of the early warning signs of fascism on a poster in the Holocaust Memorial Museum in the US.

She said she was reading the points to show that India's constitution was under threat and the country was being "torn apart" by the ruling party's "lust to divide".

In the vote, Indians across the country demonstrated unequivocally they wanted the BJP and Prime Minister Narendra Modi back in power for a second term. The scale of victory stunned the opposition and pundits, who were expecting a much closer race.

Mahua Moitra, however, said it was "the very nature of the overwhelming-ness of this mandate makes it necessary for the voices of dissent to be heard".

Then, in a rebuke to the governing party, she listed these seven "danger signs of early fascism":

Mahua Moitra spoke for about 10 minutes while MPs from the treasury benches tried to shout her down, but she stood firm and called on the Speaker to rein in the "professional hecklers".

Since it came to power, the BJP has been accused of targeting minorities and weakening state institutions under Modi's powerful leadership. It has consistently dismissed such allegations.

Her speech in English, which was laced with facts and figures, even included a couple of poems in Hindi. Many people on social media praised her for reciting these as she is not a Hindi-speaker - her mother tongue is Bengali.

A former investment banker with JP Morgan, Mahua Moitra quit her well-paying job in London in 2009 to return to Indian politics. She has been the TMC's national spokesperson for several years and regularly appears in prime-time TV debates.

During the recent elections, the BBC spent two days following her around on the campaign trail in rural Krishnanagar constituency in West Bengal state, where the TMC is in power.

In speech after speech, she took direct aim at Modi. She talked about the deadly suicide attack in Kashmir and India's subsequent air raid in Pakistan. She accused the BJP of trying to divide Hindus and Muslims. She said elections in the past were to change the government, but this election was to save the constitution of India.

So on Tuesday, when the 43-year-old stood up to address the lower house, I was among those expecting an intelligent speech. But it was more than that. It won her fans and admirers and trended on Twitter for hours.

Moitra's speech is significant at a time when one party - Modi's BJP - dominates parliament and the opposition is struggling to be seen and heard.

It is even more significant considering politics in India is still very patriarchal. It is dominated by men, and women make up only 14% of members of the house. And although there are some fiery female MPs, there are many who prefer to stay on the sidelines.

Mahua Moitra, however, is not afraid to ruffle feathers and many will hope her speech inspires more female MPs to do the same.

"We are in the opposition, so we have to bring up the issues. We have to speak up and we have to point it out. We will speak up on whatever issues there are," Mahua Moitra told BBC Hindi on Wednesday, a day after her speech.

"The opposition's job is to highlight the failings of the government and highlight issues that are not being dealt with by the treasury benches. That is my job and I will do that to the best of my ability."