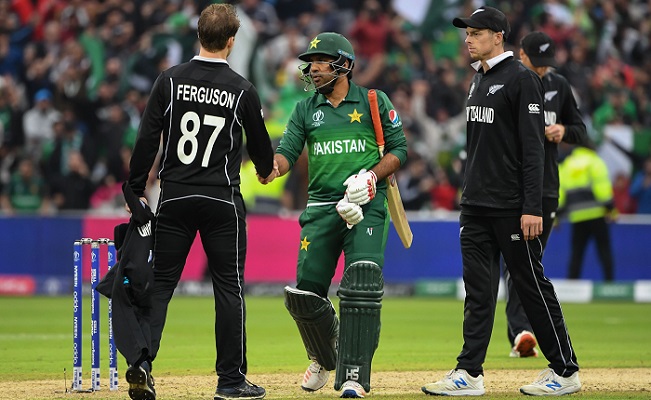 Pakistan kept alive their chances of reaching the World Cup semi-finals on Wednesday, cruising to a six-wicket win against previously unbeaten New Zealand at Edgbaston.

A masterful knock of 101* from Babar Azam and an excellent return of 3/28 from Shaheen Shah Afridi helped Pakistan to a six-wicket win over New Zealand.

After rain ensured a delayed start, Kane Williamson opted to bat, a decision that appeared questionable with the start Pakistan’s bowlers enjoyed.

Mohammad Amir went through the defence of Martin Guptill to kick things off before Shaheen unleashed a lethal spell, finding the outside-edges of Colin Munro, Ross Taylor and Tom Latham to leave New Zealand reeling on 46/4. Shadab Khan heaped more misery upon the Black Caps with the dismissal of skipper Williamson for 41.

Jimmy Neesham and Colin de Grandhomme, New Zealand's two seam-bowling all-rounders, then rescued the innings to halt fears of a major collapse. The pair took their time: Neesham reached 50 from 75 balls while de Grandhomme – renowned for his big-hitting skills – displayed his adaptability with a measured half-century of his own.

While a run-out ended de Grandhomme's stay, Neesham continued to be a thorn in Pakistan's side, and finished his and New Zealand's innings with a six that took him to an ODI career-best 97*, and his side to 237/6, an impressive score on a challenging pitch.

In chasing the target, Fakhar Zaman perished early and a vicious bouncer from Lockie Ferguson saw to the end of Imam-ul-Haq on 19, Martin Guptill diving forward from point to take an excellent catch after the ball popped up off the left-hander's bat.

From there, Hafeez and Babar calmed the nerves of the thousands of Pakistan fans with a 66-run partnership. The part-time off-spin of Williamson then intervened for an unlikely breakthrough, as Hafeez holed out to Ferguson into the deep to leave Pakistan 110/3.

Haris Sohail – following on from his 89 against South Africa last Sunday – entered the fray and proceeded to be a more-than-capable partner for Azam as he hit a second consecutive half-century.  With vociferous support to boost them, the pair took Pakistan to victory, with New Zealand succumbing to their first loss of the tournament.

Pakistan, who beat South Africa on Sunday to revive their flagging World Cup campaign, now have seven points, level with fifth-placed Bangladesh and just one point behind hosts England.

New Zealand are second in the table on 11 points behind Australia, the only team who have qualified so far.

The top four teams qualify for the semi-finals.