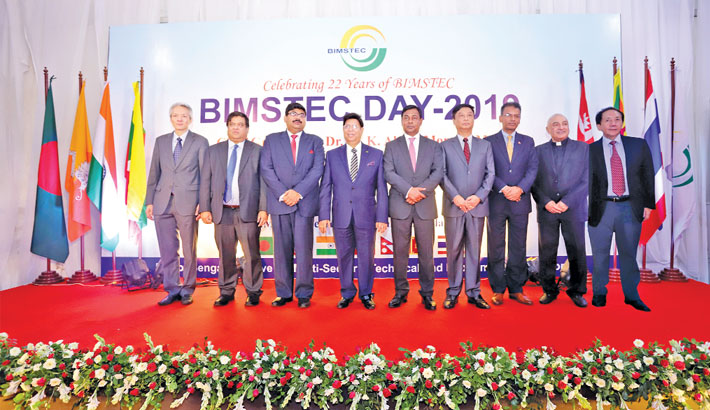 Foreign Minister Dr AK Abdul Momen along with other guests poses for a photograph after attending a reception marking the 22nd anniversary of BIMSTEC at its office in the capital’s Gulshan on Tuesday night.

“A sustainable and peaceful Bay of Bengal region can only be ensured when all the member states of BIMSTEC will make the organisation more resourceful in the coming days,” he said.

The foreign minister made the statements while addressing a reception marking the 22nd anniversary of BIMSTEC at its office in the capital’s Gulshan area on Tuesday night.

The Bay of Bengal Initiative for Multi-Sectoral Technical and Economic Cooperation (BIMSTEC) is an international organisation of seven nations of South Asia and South East Asia – Bangladesh, India, Myanmar, Sri Lanka, Thailand, Nepal and Bhutan – those dependent on Bay of Bengal.

The BIMSTEC Secretariat in Dhaka held the reception where diplomats of different countries participated.

Narrating Bangladesh’s commitment towards BIMSTEC process, Dr Momen said pursuing BIMSTEC integration for rapid progress both economically and socially for the people of this region is one of the top priorities of our Foreign Policy.

Referring Prime Minister Sheikh Hasina’s proposal during the last summit, the foreign minister said proposal for restructure of the existing 14 areas of cooperation under three main priority clusters namely 'Sustainable Development, 'Security and Stability’ and 'People to People Contact' will bring synergy, focus and speed in the BIMSTEC process.