Khaleda to walk out of jail on bail soon: Moudud 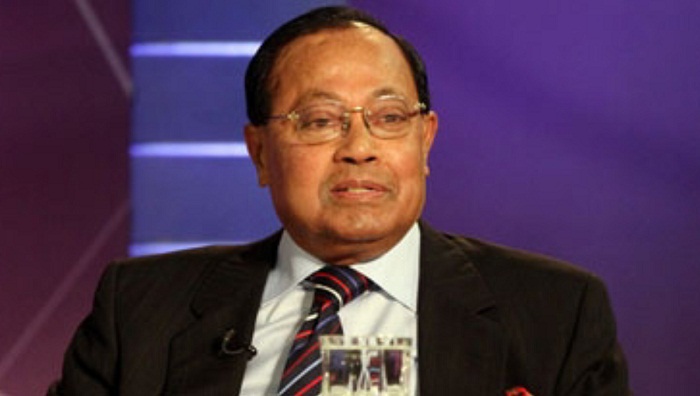 BNP senior leader Moudud Ahmed on Wednesday expressed the hope that their imprisoned party chairperson Khaleda Zia will be freed soon on bail and lead a democratic movement in the country.

“I’d earlier said she (Khaleda) would get bail by a week, and she was granted bail in two cases by the time. We’re now waiting to get bail for her in two more cases as we’re trying to free her through a legal process,” he said.

Speaking at a seminar, the BNP leader further said, “Khaleda Zia will return among us very soon by getting freed on bail, and she’ll lead the democratic movement. The rule of law and democracy will be restored in Bangladesh under her leadership.”

BNP arranged the programme at the Institution of Engineers, Bangladesh marking the International Day in Support of Victims of Torture.

Moudud, a BNP standing committee member, said Khaleda is being repressed as she has been kept in jail for over 15 months in a ‘false and fake’ case.

He alleged that their party leaders and activists have been going through serious repression over the last 10 years. “I think it won’t be possible to eliminate BNP through repressive acts. This government has rather established BNP to remain for the next 100 years through its repression.”

The BNP leader said those who were subjected to repression over a decade will never support Awami League.

Speaking at the programme, BNP secretary general Mirza Fakhrul Islam Alamgir stressed the need for forging a strong unity of people to oust the current ‘autocratic’ regime. “The strength of people’s unity is the only way to defeat those who want to establish one-party rule and cement power for long time. That’s why we badly need to forge the people’s unity.”

Apart from people’s unity, he said, political parties, intellectuals and human rights activists also must get united to get rid of the ’misrule’ of the current ‘despotic’ government.

Fakhrul said their leaders and activists were repressed, but they were not mentally defeated. “We’ll defeat the government through a united movement.”

He alleged that the way their party leaders and activists were repressed over the last 12/13 years is unprecedented in the world.

The BNP leader said many of their party leaders and activists alongside Khaleda Zia have been kept in jail as the government wants to cement the ‘one-party’ rule in the country.

He said their main demand is now to have their chairpersons freed from jail. “Then we demand holding a fresh election immediately under a non-party government. We think a fresh credible election is the only way to resolve the current political problem.”

At the beginning of the seminar, a documentary was screened depicting the torture and repression on BNP leaders and activists.

Some victims, who were made disappeared and repressed and rape at different times, narrated their bad and painful experiences at the programme.

Some foreign diplomats stationed in Dhaka, including representatives from the UK, Australia, India, Japan and UNDP, were present at the event.