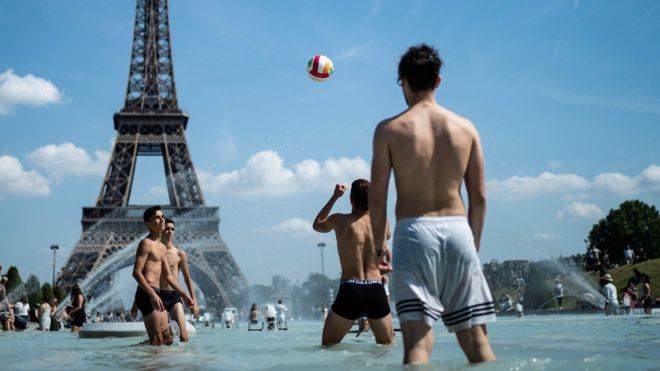 France is starting to close dozens of schools because of a heatwave, with temperatures expected to climb above 40C (104F) in some regions on Thursday.

About 50 schools in the Essonne region, just south of Paris, are being shut, as they lack sufficient air conditioning.

On Thursday, French BFMTV says, schools will also be shut in the Val-de-Marne and Seine-et-Marne regions near Paris.

In parts of northeastern Spain the heat is expected to reach 45C on Friday. Germany and Italy are still below 40C.

The exceptionally hot air has blown in from the Sahara.

Switzerland is also sizzling, but there the authorities insist that schools will remain open, because working parents cannot be expected to look after their children during the day.

French officials decided that in Paris and Lyon only the least polluting vehicles would be allowed on the roads from Wednesday. Paris is especially prone to smog in hot weather.

Parisian drivers are also being offered free parking places to encourage them to use public transport instead.

France was traumatised by a heatwave in 2003 which was blamed for 15,000 extra deaths.