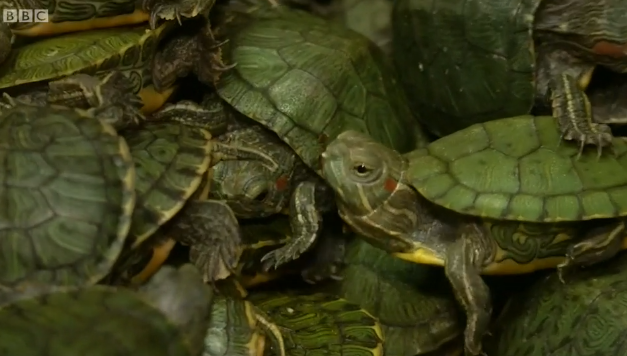 Two Indian men were arrested after the 5,255 red-eared sliders - a semi-aquatic species of turtle - were found in baskets inside their suitcases.

Malaysia is a major transit point for wildlife smugglers, who typically go on to trade in other Asian countries.

They could now face up to five years in prison and a fine.

"This is the first such case of the year, and we are unable to state whether it involves a similar quantity or more [if compared with previous cases]. But it appears to be quite a large quantity in two suitcases found at the same time," Mr Yusof said at a press conference on Wednesday.

Red-eared sliders are the most popular turtle in the pet trade, according to the International Union for the Conservation of Nature.

They are classified as an invasive species in a number of habitats and are now found in the wild in countries around the world, as a result of many being released by owners or escaping.

The turtles seized in Malaysia last week will be put under the care of wildlife officials.