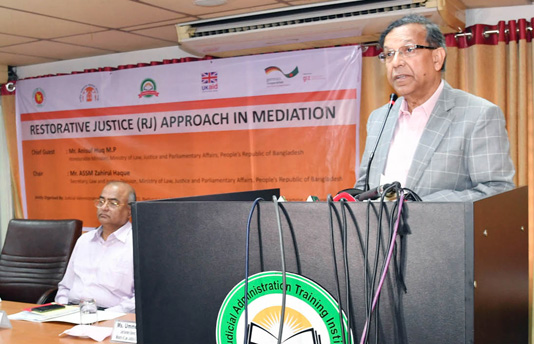 Law, Justice and Parliamentary Affairs Minister Anisul Huq on Wednesday said access to justice is one of the a basic rights of citizens and government thinks all the citizens shall have this with fair trial.

“It is difficult to ensure legal advice and representation for the people, who are still lagging behind socio-economically in a developing country like us. For this, the present government formulated Legal Aid Act, 2000, to provide access to justice to poor and helpless people through district legal aid offices,” he said.

The minister said these while addressing the inaugural ceremony of a training workshop titled ‘Restorative Justice (RJ) Approach in Mediation’ for legal aid officials at Judicial Administration Training Institute (JATI) in the capital.

Anisul Huq said RJ is one of the ways to resolve dispute through mediation.

“We resolve disputes here through participatory alternative ways. Though it is follows almost same procedure like arbitration, with slight difference. Through this process, we can resolve local disputes, compensate the victims and give priority to lessen the damage,” he added.