No laws for reckless motor bikers? 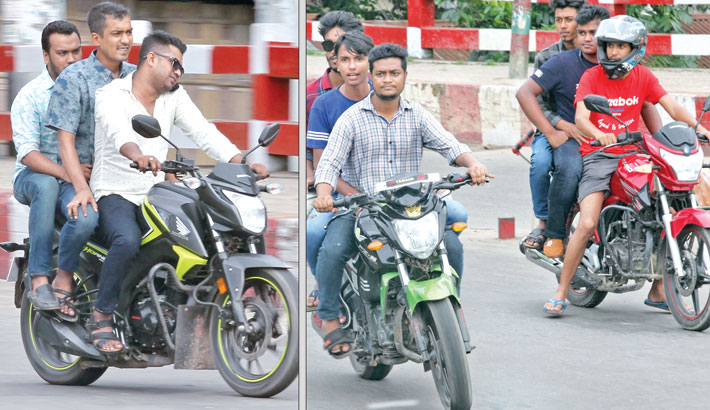 Motorbike riders still do not care about traffic rules despite the ongoing awareness campaign. The motorcyclists with pillion riders are seen on the streets in Chattogram city without using helmets. One of them talks over mobile phone while driving the bike. The photo was taken on Tuesday. - Rabin chowdhury

Amid Dhaka’s traffic jam, motor bikers drive recklessly ignoring all kinds of laws which sometimes leads to fatal accidents and add more chaos on the streets as if it was a free for all without serious police intervention.

Running on wrong lanes and with two or more co-riders have become the order of the day as this two-wheelers became more popular with the introduction share-riding companies like Uber and Pathao. In the country side motorbikes are the best mode of transportation, where young people take to the highways or narrow roads in high speed.

Nagging traffic congestion and lack of public transports have abnormally pushed up the use of motorcycles individually and for ride-sharing services in the country during the past two and half years, statistics showed.

But motorcycles are indiscriminately parked in “no parking” areas, on footpaths or along roads causing inconveniences for regular traffic and commuters.

Experts blamed lack of monitoring, culture of impunity and underhand dealings between lawbreakers and law enforcers for the rampant violation of traffic rules.

SM Murad Ali, deputy commissioner of (Traffic South Division) of Dhaka Metropolitan Police, told daily sun: “We are trying our best to bring discipline in the streets and encourage people to follow traffic rules. But in reality habit of the vehicles drivers and pedestrians are not changed. I would like to say that we are forcing them to change their habit.”

“They are doing well as long as we are forcing them to follow traffic rules. While we are not in the road they are desperate to break the traffic law,” he added.

The police official said motorcyclists are the top traffic rules breaker. Cases filed against motorbikes for various reasons including not having valid documents and driving licenses, riding on the footpath, not using helmets and violation of traffic rules

On March 5, 2012, the High Court asked the authorities not to allow motorcycles or cars on footpaths.

Even more than seven years after the High Court order to stop plying of vehicles, particularly motorcycles, on footpaths and walkways in the capital, violation of traffic rules and the HC order is rampant. It was also seen that motorcyclists blow their horn at pedestrians on the footpath, asking them to move aside, so that they can drive their motorcycles at speed on the footpaths.

Due to indiscriminate motorbike driving on the footpath, Dhaka Metropolitan Police (DMP) set up obstacles on footpaths to stop motorcyclists.

Most of the road accidents caused by motorcycles remain unreported as they are considered as individual cases.

Sources said motorcycle movement from the capital to remote villages have increased manifold.

Teenagers are more inclined to drive bikes. Most of them are reckless, unskilled and do not have a driving license. Without helmet and triple riding is also common among the teenagers.

Experts said it is easy to stop these accidents, not by the police or by the law, but creating awareness and the families have an important part to play.

Every day a large number of new motorcycles hit the streets. But in the last two years the number of motorbike has doubled since the launch of the App based ride sharing service .

Ride sharing of motorcycle, due to the public transport crisis, is giving relief to the passengers but accidents are on the rise because either the driver has no training or just for fun. False documents were being used widely. Despite knowing the risks of reckless driving, many speed up to cover loss of time due to traffic chaos.

“Motorcycle drivers are usually amateur drivers. As a result, they do not have an institution of education.”

It was seen in the statistics of traffic weeks and fortnight that more than half of the traffic rules violation cases were filed against riders of two wheelers.

But no visible progress was seen after several traffic awareness campaign by police across the country and in the capital.

On April 5, a motorcyclist and the pillion rider, have died after the driver lost control of the two-wheeler on Khilgaon Flyover in the capital.

On April 25, a university student was killed after a covered van ploughed into the motorcycle she was riding in front of the Shaheed Suhrwardy Medical College Hospital in the capital’s Shyamoli area.

On May 25, three motorcyclists were killed after a motorbike crashed into a truck on Dhaka-Chattogram highway in Duckbanglow area of Mirsharai upazila in Chattogram.

On March 29, two motorcyclists were killed as a sand laden truck rammed their motorcycle in Mohammadpur area of Dhaka.