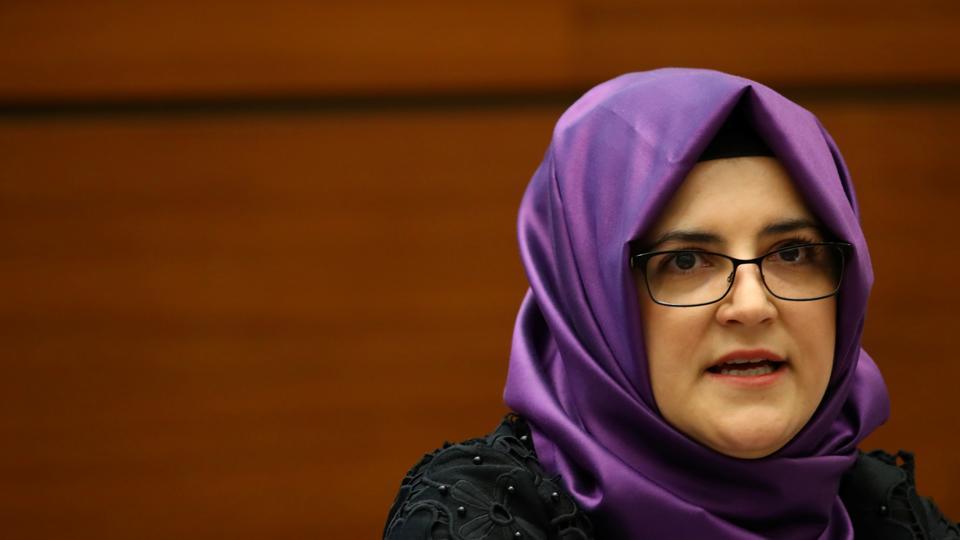 The Turkish fiancee of murdered Saudi journalist and dissident Jamal Khashoggi insisted in an emotional interview Tuesday that Washington has the ethical responsibility to initiate an international investigation into his killing.

Khashoggi, a Washington Post contributor and US resident, was killed last October 2 by Saudi agents while at Saudi Arabia’s consulate in Istanbul to obtain paperwork ahead of his wedding to Hatice Cengiz.

Speaking to AFP on the sidelines of the UN Human Rights Council in Geneva, the 36-year-old Turkish scholar described her growing desperation as she stood outside the consulate and waited for her fiance to emerge, in vain.

“At the beginning, I thought maybe something bad had happened to him, but I never thought the really far end of the picture,” she said, speaking through an interpreter.

She said she suspected that Khashoggi -- a harsh critic of Saudi Crown Prince Mohammed bin Salman -- was experiencing some of the things he had feared.

“Maybe he was arrested inside, maybe they were interrogating him,” she said. “I never (considered) the possibility of a murder.”

With tears flowing down her cheeks and dripping into her silk hijab, she said she clung for months to the hope that the man she had planned to marry, and whose body has not been found, “might be alive”.

But, she said, she had come to accept the truth: “He was violently murdered and massacred.”

The independent rights expert, who does not speak for the United Nations but reports her findings to it, called on UN Secretary General Antonio Guterres to initiate an international criminal investigation into the case.

Guterres’s spokesman Stephane Dujarric however said Guterres did “not have the power or the authority to launch criminal investigations without a mandate from a competent intergovernmental body. Power and authority to do that lies with member states.”

Cengiz told AFP it was obvious that the country her fiance had called home had a duty to help ensure accountability for his murder.

“Politically and ethically the USA is the country that is (responsible) for requiring an international investigation,” she said, lamenting Washington’s muted response so far.

She slammed US President Donald Trump and Secretary of State Mike Pompeo for approaching the issue in a “hazy way”, and for preferring lucrative Saudi business relations over justice.

“This attitude of the USA is highly dangerous,” she said, adding that it “sets a bad example to the rest of the world.”

“I believe Saudi Arabia should pay for this and for its actions and suspects should be sentenced. Otherwise we will all be living in a world where (only) money talks.”

Cengiz meanwhile lauded Turkey for acting “like a flagship in creating awareness regarding the murder of Khashoggi”, but said it was unfair to expect Ankara to lead calls for an international investigation.

“I think Turkey is rightfully expecting other more powerful countries to take the lead in this matter,” she said.

“Jamal didn’t actually live in Turkey,” she noted, adding that he could have settled in her home country, where he had good ties, “but he preferred the US (because) he trusted the political system there.”

Riyadh initially said it had no knowledge of Khashoggi’s fate, but later blamed the murder on rogue agents, and Saudi prosecutors have absolved the crown prince of responsibility.

But Callamard’s report said probes by Saudi Arabia and Turkey “failed to meet international standards regarding the investigation into unlawful deaths”.

Callamard is set to present her report to the Human Rights Council on Wednesday, and Cengiz said she also planned to address the body briefly to get her message across.

“High-level authorities in Saudi Arabia (may be) involved in this murder case, so it must be further investigated,” she told an event earlier Tuesday.

“There is an urgent need for an international investigation of this murder.”