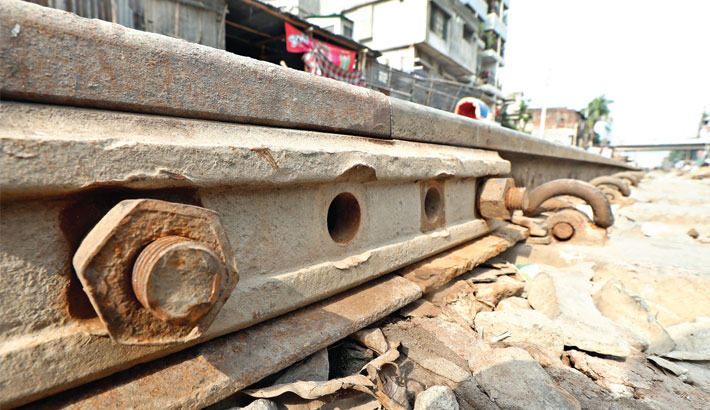 Fish bolts at different points of a railway track have gone missing while many others are becoming loose, making the rail line vulnerable to accidents. The photo was taken from the capital’s Malibagh area on Tuesday. – Reaz Ahmed Sumon

Prime Minister Sheikh Hasina on Tuesday gave directives to the railway authorities for quick repair of risky and damaged bridges on the railway routes across the country.

The premier came up with the order so that authorities concerned feel it urgent to do necessary repairs to the damaged structures as early as possible.

Sheikh Hasina, also Awami League President, gave the directives at a meeting of the Executive Committee of the National Economic Council (ECNEC) on Tuesday.

She said the bridges that are in bad condition should be renovated before monsoon to avoid any untoward incident.

After the ECNEC meeting, Planning Minister MA Mannan told the reporters that the premier gave the directives following the railway accident in Moulvibazar on Sunday that left at least four people dead and 200 others injured.

“The Prime Minister instructed the Railway Minister for quick repair of the risky and damaged culverts and bridges on the rail routes,” the Planning Minister said.