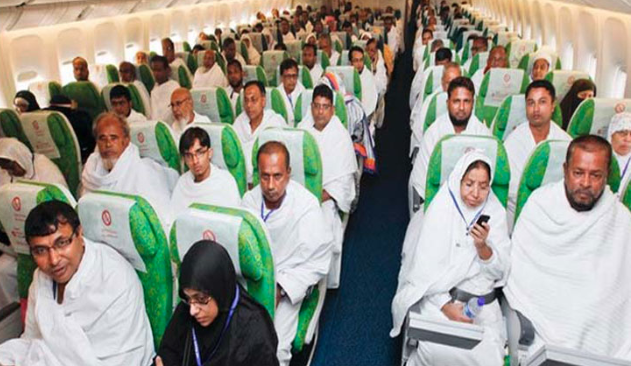 Biman Bangladesh airlines has completed all preparation to start this year’s hajj flight from July 4.

The first hajj flight BG-3001 will leave Hazrat Shahjajal International Airport with 419 pilgrims on board at 7:15am, a Biman Bangladesh airlines
press release said here today.

State minister for civil aviation and tourism M Mahbub Ali and state minister for religious affairs advocate Sheikh Mohammad Abdullah will be
present at the airport to see off the pilgrims.

Some 1,27,198 pilgrims from Bangladesh are set to perform hajj this year. Biman will carry 63,599 passengers, which is about half of the number of total hajj pilgrims. The remaining pilgrims will be flown by Saudi Airlines, the national carrier of Saudi Arabia.

This year for the first time, the immigration formalities of some Bangladeshi pilgrims will be completed in Dhaka.

The airline will operate 11 flights to Madina from Dhaka for the first time this year. Apart from Dhaka, 19 hajj flights will be operated from Chattogram while three from Sylhet.

Biman will operate 176 post-hajj flights, 147 dedicated and 29 scheduled flights from August 17 to September 15.

The airline will charge 200 US dollars per ticket in case of changing travel date, the release said adding that the cost per ticket will rise to 300 US dollars, if any pilgrim changes the travel date less than 24 hours of his/her scheduled flight.

Biman will not refund ticket money, if any pilgrim fails to travel on the scheduled flight, the release added.