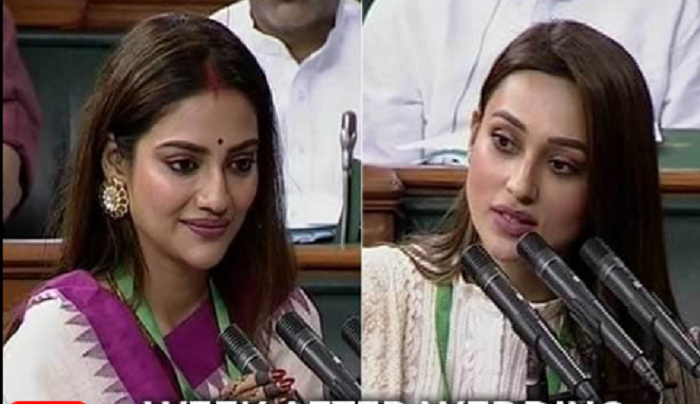 Nusrat Jahan got married to businessman Nikhil Jain on June 19 in Turkey. The wedding was attended by her actor-friend Mimi Chakraborty. Thus, the actor-turned-politicians could not take oath in Parliament along with other lawmakers when Parliament session began this month.

As soon as the House met for the day, the two took oath in Bangla, ending it with such as "Vande Matram" and "Jai Hind".

After taking oath, the two went up to Speaker Om Birla to touch his feet. It is customary for members to greet the Speaker on the podium.

On leaving Parliament, Nusrat Jahan and Mimi Chakraborty were surrounded by media persons.

Unable to get past them, Ms Chakraborty went and stood behind Nusrat Jahan. At one point, they even moved back into Parliament but came out after security personnel intervened to make way.

While Jahan is member from Basirhat, Chakraborty represents Jadavpur in the lower house.