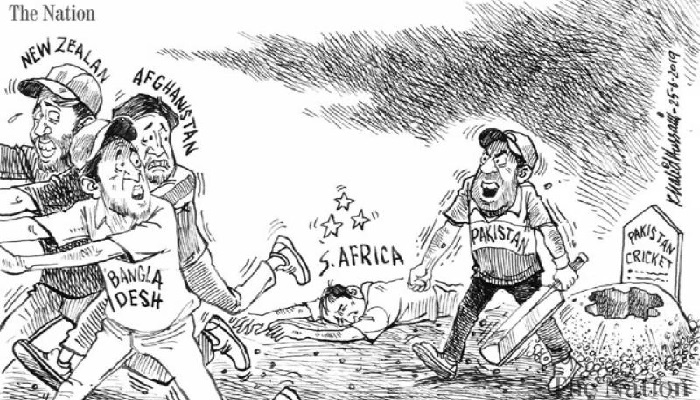 With only two win from six matches, Pakistan are now at the seventh spot in the ICC World Cup 2019 points table.

At the ascending order, Pakistan ahead of West Indies, South Africa and Afghanistan and following Sri Lanka which are on sixth spot in the points table.

Now it is normal for Pakistan and their fans to hope that skipper Sarfaraz Ahmed led team might reach in the semi-finals.

Pakistani media are now aspirant to see their team qualify for the semi-finals. They are blowing the balloon of this hope featuring and writing positively.

As part of this, on June 24, The Nation, a Pakistani English daily, has published a cartoon, depicting Pakistani cricket team heroic.

But it allegedly undermined three other world cup participating countries including Bangladesh, which Pakistan is going to face in their next three matches in the ICC World Cup.

In the cartoon, it is focused that a Pakistani batsman is in a fighting mood with his bat. He had already beaten South Africa to death and advancing to beat three players of Bangladesh, New Zealand and Afghanistan.

Three players of Bangladesh, New Zealand and Afghanistan are trying to flee the ground fearfully, the cartoon showed.

It created controversy and mass criticism on the social media platform of Bangladesh.

Mamunur Rashid, a facebook user of the country, in his facebook page commented ‘Has not this Pakistani paper (The Nation) crossed the limit through this cartoon?’.

Pakistan started their world cup campaign this year miserably. From the first five matches, they were able to secure only one win.

At their first match against West Indies at Trent Bridge on May 31, they were defeated miserably by seven wickets.

On June 3, Pakistan beat England by 14 runs in the same venue and that was the only win for them in their first five matches.

Later, they shared point with Sri Lanka, as rained abandoned the match at Bristol on June 7.

On next match they accepted miserable defeat against Australia and India at Taunton and Old Trafford respectively and were nearly derailed from the race of semi-finals.

Then, Pakistan faced bitter criticism from home and abroad from their fans. Later, their win against South Africa by 49 runs at the historic Lord' stadium on June 23, give oxygen to their semi-finals hope in the world cup.

Will Pakistan be able to defeat New Zealand, who is now at the first position in the ICC World Cup 2019 points table with no defeat?

Can they overcome the hill of Team Tigers progress as Bangladesh has already defeated South Africa, West Indies and Afghanistan in dashing style?

For Bangladeshi fans have to wait till July 5 as Bangladesh will take on Pakistan at the Lord’s ground on the date. Team Tigers fans believe that Bangladesh will surely give an appropriate reply to the cartoon through ground performance.