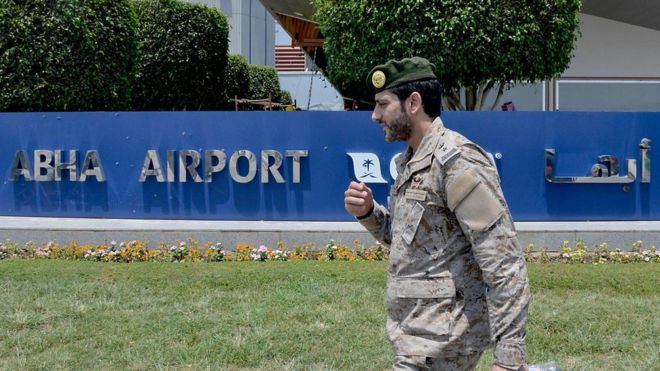 A Syrian civilian has been killed in an attack by Yemen's rebel Houthi movement on an airport in southern Saudi Arabia.

A spokesman for the Saudi-led military coalition fighting in Yemen said 21 other people were injured when Abha airport was struck on Sunday evening.

He did not say what type of weapon was used. But a Houthi TV channel said its fighters had targeted airports in Abha and nearby Jizan with drones.

It is the second time Abha airport has been hit in less than two weeks.

On 12 June, two children were among 26 civilians injured when a cruise missile launched by the Houthis struck the arrivals hall. Human Rights Watch denounced it as an apparent war crime.

The injured civilians were from Saudi Arabia, Egypt, India and Bangladesh, and included three women and two children, he added.

Houthi-run Al-Masirah TV earlier cited a rebel military spokesman as saying it targeted "military sites" at Abha airport and Jizan airport - about 150km (94 miles) to the south - with Qasef-2K drones.

The spokesman added: "More painful operations will continue if the Saudi-led aggression and siege against Yemen continue."