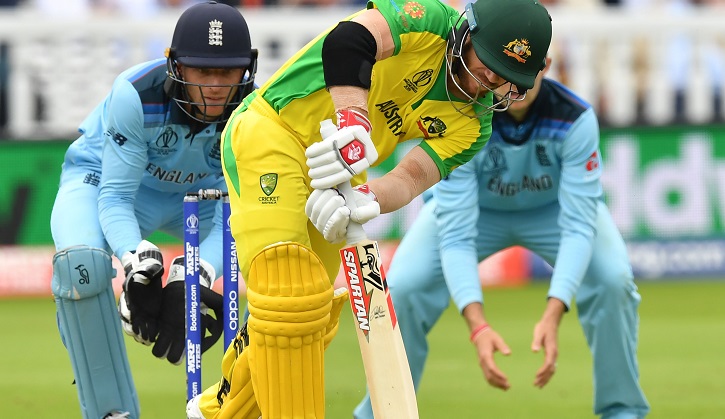 Australia captain Aaron Finch survived some close calls as the reigning champions began to take control against arch-rivals England in their showpiece World Cup clash at Lord's on Tuesday.

After 15 overs, Australia were 75-0, with Finch 39 not out and David Warner unbeaten on 31 -- their fifth successive partnership of 50 or more at the tournament.

Warner, unsurprisingly, was booed on his way to the wicket in relation to his recent return from a year-long ban for ball-tampering.

England captain Eoin Morgan, who had said Monday it was not his job to tell the crowd how to behave, had won the toss in overcast conditions and on a green pitch that promised to help his attack.

But in form left-hander Warner was soon into his stride with a pull for four off fast bowler Jofra Archer, passed fit after feeling some tightness in his left side.

Finch, however, was dropped on 15 when James Vince at backward point could not hold a tough chance.

And Finch had moved on to 18 when he survived Chris Woakes's lbw review, with Chris Gaffaney's original not out decision upheld on umpire's call for height.

Despite some testing deliveries from Archer, the tournament's joint-leading wicket-taker with 15 scalps, Australia's openers remained at the crease, with Warner driving Durham quick Mark Wood over mid-on for four.

England, bidding to win the World Cup for the first time, were unchanged from the side that suffered a surprise 20-run loss to Sri Lanka.

Australia made two changes from the team that Bangladesh by 48 runs in Nottingham, with off-spinner Nathan Lyon replacing leg-spinner Adam Zampa and Jason Behrendorff coming in for fellow paceman Nathan Coulter-Nile.

Only the top four at the end of the 10-team round-robin stage will qualify for the semi-finals.

Australia are currently second in the table.

England, who have also lost to Pakistan, are fourth but any more slip-ups for Morgan's men in their three remaining pool games against Australia, India and New Zealand could imperil their chances of reaching the knockout stages.

Top-ranked England, however, have won 10 of their past 11 one-day internationals against Australia.