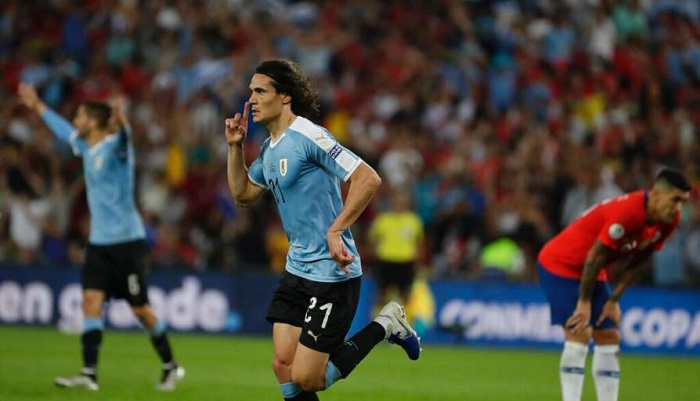 Uruguay will face Peru in the quarterfinals on Saturday, while Chile will play in Sao Paulo against Colombia which has won all three of its matches and is yet to concede a goal in the tournament.

Ecuador and Japan drew 1-1 in the other match of Group C, a result which eliminated both from the tournament.

Cavani scored with a header to the right of Chile goalkeeper Gabriel Arias when more than 58,000 fans at the Maracana Stadium in Rio de Janeiro were already accepting a goalless result.

It was the striker's second goal in this year's Copa America.

The match in Rio was far less tense than the last three of one of South American soccer's most lively rivalries. But Chile coach Reinaldo Rueda tried to put some spice in his starting lineup, with defender Gonzalo Jara playing for the first time in the tournament.

On this same day four years ago, Jara was responsible for an incident with Cavani that ended in the striker being sent off in the quarterfinals of the 2015 Copa America in Chile.

With the match at 0-0, Jara provoked Cavani by pushing a finger into his rear. Cavani reacted by punching Jara and was sent off. Chile prevailed with a late goal and went on to win the tournament.

On Monday, though, Jara's only effort that was noticeable was kicking a pitch invader when the match was 0-0.

The two teams also had rough encounters in 2018 World Cup qualifiers. Uruguay won 3-0 at home and Chile got revenge with a 3-1 win in Santiago.

Chile dominated ball possession through the match, but Uruguay improved after midfielder Nicolas Lodeiro was substituted by Nahitan Nandez after the break.