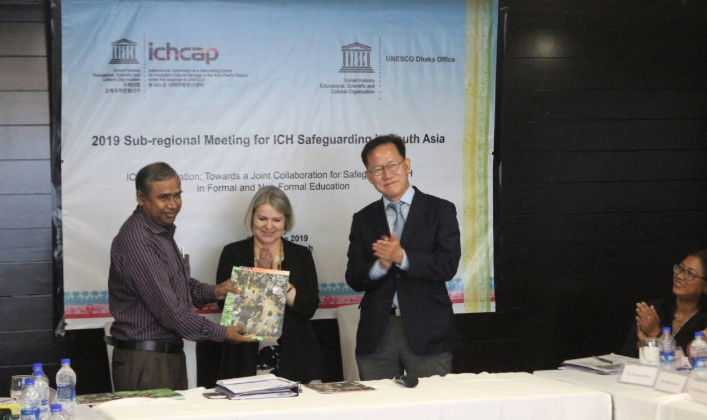 The launching ceremony was held at a city hotel during the sub-regional meeting for ICH Safeguarding in South Asia titled ‘ICH in Education: Towards a Joint Collaboration for Safeguarding ICH in Formal and Non-Formal Education’.

The three-day meeting, jointly organised by the ICHCAP and Unesco Dhaka Office, began on Monday and will end on Wednesday.

The brochure ‘Intangible Cultural Heritage and Gender’ highlights the mutual relationship between gender norms and ICH and emphasises that understanding the intimacy between ICH and gender is important for effective ICH safeguarding and gender equality.

ICHCAP has been engaged in the multi-language publication project to promote public understanding of Unesco’s 2003 Convention for the Safeguarding of the Intangible Cultural Heritage and translated and published the two Unesco brochures into 18 languages in the Asia-Pacific region, including Bhutanese, Dhivehi, Indonesian, Korean, Nepali, Sinhala, Tajik, Tamil, Thai, Uzbek, Vietnamese, according to UN Information Centre, Dhaka.