State of Railway Stations in Bangladesh 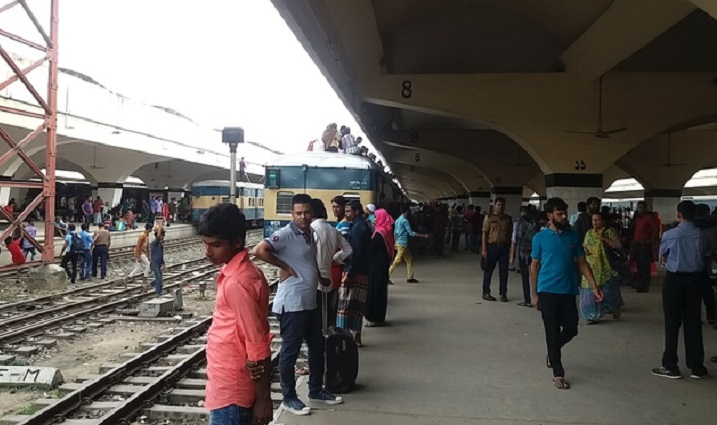 People of Bangladesh are familiar with railways and rail journey. Railways started functioning since 2nd half of 19th century in Bangladesh. The 1st railway service was inaugurated between Sialdah of Kolkata to Jogati of Kushtia. And thereafter different new lines were constructed and majority of district and subdivision towns got connected with each other by railways. Railway service brought a big change in the rural and semi-urban areas of the then Bengal. A large economic activity started centring the railway stations in that time. Farmers and small businessmen got opportunity to sell their products in the big towns and cities side by side with the big businessmen and industrialists.

The common scenario of railway stations shows that there are the tea stalls, book stalls, restaurants, hawkers, cobblers, beggars and many others wander in the railway stations’ platforms. Other than the big railway stations, these phenomena are very common in small railway stations. Sometimes we see some quacks give treatment to the patients of different diseases in their make-shift clinics on the platforms. So the railways had been the part of the culture of our common people and still now it is going on. Since the inception of railway services it has become the commoners’ transport side by side the affluent people.

Tea stalls in the railway stations are always the centre of gossiping of the common people. We know railways had the great contributions of popularising tea drinking in this part of the sub-continent. Still now we see the old billboards of usefulness of tea drinking in railway tea stalls and platforms. These billboards were set up during the British period when the then government wanted to popularise tea drinking. We can see those billboards of the British period in many important railway stations currently within Bangladesh area. These billboards written in three languages such as Bangla, Hindi and English are still displayed as a legacy of British rule of pre-partitioned India.

Another thing, that is, beggars’ life style and their passing of the days on the railway platforms was very common in those days as the railway stations were considered the centre of unions of the common people of the ins and around of that area. We could also see the persons repairing umbrellas on the railways platforms during summer and rainy seasons. Many of them would come from the area nearby of that particular station or districts.

Koolies (porters) in the stations are very powerful and influential group. They are very united and could take all the decisions by their Sardar (leader) though usually Sardar had talks with their fellows before giving serious decisions. Koolies earn money and they deposit all the money to the Sardar and at the end of the day Sardar distributes the money to their fellow members. But with the development of road transports and the passage of time, small railway stations cannot attract people for train journey. In some areas people prefer road transport to railway service.

In our boyhood we used to see bookstalls in every important railway stations. Particularly in the junction railway stations these were very much common. People of all walks of lives used to buy daily papers, weeklies, and religious books, Bengali novels of Indian and Bangladeshi writers. Moreover, the stall owners also used to keep popular English learning books and pinned-up magazines. This was common scenario of railway stations forty years back. But with the technological changes like digitalisation, this scenario is decaying gradually.

In the rural railway stations, another feature the prevailed in the past was the presence of Harijan community people. When railways were constructed in this part of the sub-continent, the British people brought those people from Odisha, Moddhapradesh and other parts of the then India. Mainly, they used to do cleaning the railway structures and compartments. The Bengali people then were very much disinterested to do such types of work. Still now their descendants do such types of work at the railway stations, compartments and railway buildings.

It is also common in the railway platforms and adjacent areas that some pauperised families occupy some spaces as their make-shift shelters/homes. Children play in and around that area and mothers are busy to prepare food for them using indigenous hearths while the family heads are out of their place for their work. Members of the law enforcing agencies evict them for a short period but they again come to the same places for living.

In the railway stations hawkers, almond sellers, bakery items sellers, sweet items sellers are very common. For their activities the railway platforms appear as dirty and unclean area. The cleaner assigned for this work are not that much sincere to make them clean and user-friendly all the time. Even the urinals and latrines of the platform and adjacent buildings keep unclean permanently as if it is perpetual. Usually the cleaners clean those spaces once in a day and after that passengers/wandering people start using those places. For that the places are getting unclean with the times. Then it appears that cleaners have no responsibility to make clean these areas once again in the same day.

Floating people and workless or jobless persons gather on the platforms like on-lookers as what happens surrounding them is very common in the railway platforms. Pickpockets and hijackers become very active when trains come and leave. Passengers coming and going are their usual targets. It is assumed that the railway authority and members of railway police of that particular station know them very well. Sometimes it happens that the money lost or pickpocketed from a passenger is recovered with the interventions of the railway police.

These are the overall pictures of the most of the railway stations in Bangladesh with few exceptions. We know railway is the commoners transport and most secured transport system for the people. Recently the government and the railway authority are trying to improve railway communication and some big projects have already been completed and some are ongoing. But still now the ideal situation is far away from the reality. The railways services would be developed considerably if the good intentions of authority work properly.