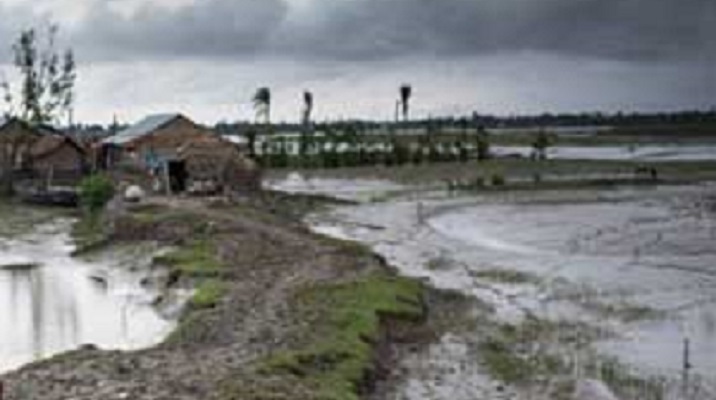 Sea-level rising potentially impacts on human population (especially those of the coastal regions and islands), the natural environment and marine ecosystems). Two main factors contributed to the sea level rise. The first is thermal expansion: as ocean water warms, it expands. The second is from the contribution of land-based ice due to increased melting. The major store of water on land is found in glaciers and ice sheets.

Sea level rise is feared to continue for centuries. In 2007, the Intergovernmental Panel on Climate Change (IPCC) projected that during the 21st century, sea level will rise by another 18 to 59 cm (7.1 to 23 in), but these numbers do not include "uncertainties in climate-carbon cycle feedbacks nor do they include the full effects of changes in ice sheet flow".

For the past 6,000 years, the world's sea level gradually approached the current level. During the previous interglacial about 120,000 years ago, sea level was for a short time about 6 metres (20 ft) higher than today, as evidenced by wave-cut notches along cliffs in the Bahamas. There are also Pleistocene coral reefs left stranded about 3 metres above today's sea level along the south-western coastline of West Caicos Island in the West Indies.

Sea level rise estimates from satellite altimetry since 1993 are in the range of 2.9–3.4 mm/yr; Based on tide gauge data, the rate of global average sea level rise during the 20th century lies in the range 0.8 to 3.3 mm/yr, with an average rate of 1.8 mm/yr; Recent studies of Roman wells in Caesarea and of Roman piscinae in Italy indicate that sea level stayed fairly constant from a few hundred years AD to a few hundred years ago; Since the Last Glacial Maximum about 20,000 years ago, sea level has risen by more than 120 m (averaging 6 mm/yr) as a result of melting of major ice sheets. A rapid rise took place between 15,000 and 6,000 years ago at an average rate of 10 mm/yr which accounted for 90 m of the rise; thus in the period since 20,000 years BP (excluding the rapid rise from 15–6 kyr BP) the average rate was 3 mm/yr; relative sea level rise at specific locations is often 1–2 mm/yr greater or less than the global average.

There is a widespread consensus that substantial long-term sea-level rise will continue for centuries to come. IPCC 4 estimated that at least a partial deglaciation of the Greenland ice sheet, and possibly the West Antarctic ice sheet, would occur given a global average temperature increase of 1–4 °C (relative to temperatures over the years 1990–2000). This estimate was given about 50 per cent chance of being correct. The estimated timescale was centuries to millennia, and would contribute 4 to 6 metres (13 to 20 ft) or more to sea levels over this period. There is the possibility of a rapid change in glaciers, ice sheets, and hence the sea level. Predictions of such a change are highly uncertain due to a lack of scientific understanding. Modelling of the processes associated with a rapid ice-sheet and glacier change could potentially increase future projections of sea-level rise.

Future sea level rise could lead to potentially catastrophic difficulties for shore-based communities in the next centuries: for example, many major cities such as London and New Orleans already need storm-surge defences, and would need more if the sea level rose, though they also face issues such as subsidence. Sea level rise could also displace many shore-based populations: for example it is estimated that a sea level rise of just 200 mm could create 740,000 homeless people in Nigeria. Maldives, Tuvalu, and other low-lying countries are among the areas that are at the highest level of risk. The UN's environmental panel has warned that, at current rates, sea level would be high enough to make the Maldives uninhabitable by 2100. Future sea-level rise, like the recent rise, is not expected to be globally uniform. Some regions show a sea-level rise substantially more than the global average (in many cases of more than twice the average), and others a sea level fall. However, models disagree as to the likely pattern of sea level change.

In September 2008, the Dutch politician Cees Veerman advised in a report that the Netherlands would need a massive new building programme to strengthen the country's water defences against the anticipated effects of global warming for the next 190 years. This commission was created in September 2007, after the damage caused by Hurricane Katrina prompted reflection and preparations. Those included drawing up worst-case plans for evacuations. The plan included more than €100 billion (US$144bn), in new spending through the year 2100 to take measures, such as broadening coastal dunes and strengthening sea and river dikes.

The Environmental Protection Agency (EPA) now predicts a global sea-level rise of about 10 to 15 inches by the year 2025 and an additional 20 inches to more than six feet by 2100. Nearly 75 per cent of Americans, for example, live on or within 50 miles of the coast. Rising seas will increase coastal erosion, pollution, storm damage, and flooding pose threats to coastal roads, bridges, jetties, breakwaters, docks, piers, and waterfront property. Intruding salt water might contaminate groundwater supplies and threaten landfill and hazardous-waste sites. Many of the nation's 900 estuaries, where coastal rivers merge with the ocean, could be damaged in a variety of ways. Some would be more vulnerable than others, mainly because of their geology and the amount of shoreline development. Consequently, estuaries along the Atlantic and Gulf coasts would be particularly hard hit, whereas the deep, steep-walled fjord-type estuaries characteristic of the British Columbia and Alaska coasts would be least affected. Here in Oregon, Coos Bay would be one of the estuaries with potential for serious harm. With higher sea level, salt water would intrude farther into the estuary, thus increasing salinity and moving the salt front farther upstream. Such destructive organisms as shipworms, gribbles, and barnacles which require relatively high salinity to survive--could migrate farther up the estuary, attacking wooden structures wherever they thrive. If the increased salinity were to alter the mixing and flushing rates of the estuary, pollution could increase dramatically. Loss of adjacent wetlands to encroaching salt water would compound the problem. Our tidal wetlands not only act as nurseries to most of our important marine fishes and shellfishes, but also filter many dangerous pollutants that rivers and creeks carry downstream to the estuary. They also buffer the effects of storms and floods. Rich and productive tidal flats, normally exposed on low tides, might be drowned and left inaccessible to various animals, including humans. Even the deposition patterns of nutrient-bearing sediments could be greatly altered, thus starving out whole populations of bottom-dwelling organisms. The rise of global sea levels seems to be inevitable, and the experts are warning us to plan for an increase of 2.3 feet by the year 2050. The key word, here, is plan, because that's our best strategy. Even as we bear down on the 21st century, there's no high-tech solution to these problems; we can't hold back the seas. Even the EPA's best recommendations are to "retreat and relocate," leaving sufficient buffer zones between the water's edge and all future permanent structures.

There is an implication that many of these impacts will be detrimental, especially for the three-quarters of the world's poor who depend on agriculture systems. The report does, however, note that owing to the great diversity of coastal environments, regional and local differences in projected relative sea level and climate changes, and differences in the resilience and adaptive capacity of ecosystems, sectors, and countries, the impacts will be highly variable in time and space.

Statistical data on the human impact of sea-level rise is scarce. A study in the April, 2007 issue of Environment and urbanization reports that 634 million people live in coastal areas within 30 feet (9.1 m) of sea level. The study also reported that about two thirds of the world's cities with over five million people are located in these low-lying coastal areas. The IPCC report of 2007 estimated that accelerated melting of the Himalayan ice caps and the resulting rise in sea levels would likely increase the severity of flooding in the short term during the rainy season and greatly magnify the impact of tidal storm surges during the cyclone season. A sea-level rise of just 400 mm in the Bay of Bengal would put 11 per cent of the Bangladesh's coastal land underwater, creating 7–10 million climate refugees.